But what if the special prosecutor turned out to be a fairy godmother sprinkling magic dust on the president’s 2020 reelection bid?

With Mueller’s long-awaited report into Trump’s Russia links only delivered late Friday to Attorney General William Barr, there are still few clues as to the contents.

The stakes, though, are crystal clear.

Mueller’s brief was to probe extraordinary allegations that Trump and his 2016 election campaign were in league with Russian agents and that Trump sought to obstruct the investigation.

Democrats, who control the lower house of Congress, had already begun talking of impeachment.

But while a damning report could, in theory, signal Trump’s political death knell, a report that fails to land serious new blows could instead supercharge an angry presidential reelection campaign.

And the very first signal coming out Friday pointed to the second scenario.

This was the fact that in handing over his report, Mueller indicated that he did not want any more indictments.

Over the course of the last two years, Mueller had already charged 34 individuals, including six former Trump associates.

But speculation had been rife that he might go deeper into the president’s circle, snaring even son-in-law Jared Kushner and son Donald Trump Jr. Now it appears they will be able to enjoy their weekend.

Down at Trump’s Florida golf resort Mar-a-Lago, where he flew earlier Friday, officials said the president would have no more events open to journalists, reversing an earlier indication of possible movements.

“The next steps are up to Attorney General Barr and we look forward to the process taking its course,” Trump spokeswoman Sarah Sanders said. 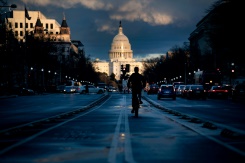 AFP/The sun sets on the US Capitol on March 22, 2019 in Washington, DC, shortly after the announcement that Special Counsel Robert Mueller had wrapped up his two-year investigation of Russian meddling in the 2016 US election

Barr says that he could send Congress a summary, or “principal conclusions,” as early as this weekend.

The real battle will be over demands from Congress — and from the wider public — to be given both the entire report, as well as the underlying legal documents.

This is because even though Mueller may not have landed a killer blow, through lack of evidence, Democrats believe his findings will fuel their own more politicized probes.

Adam Schiff, the intelligence committee chairman in the House, said on CNN that he still intends to pursue “whether the president and others around him were acting as agents of a foreign power.”

Democrats are especially keen that legislators be allowed to peruse the report before the White House.

They know that as soon as Trump gets hold of a copy he will use his formidable online presence to shape public perceptions of what the report says.

Trump has boasted several times this week about having more than 100 million followers on various platforms, principally on Twitter, and throughout the Mueller drama he has used that bullhorn to paint himself as victim of a political vendetta.

“Drug Dealers and Human Traffickers are treated better,” he tweeted when one associate was arrested.

And even if the Mueller report is damning, even if it leads to further peril, Trump will likely interpret the lack of an actual smoking gun as total vindication.

That would be just the gift he needed to rally his conservative base, saying that he’d been right all along.