The Justice Department said Barr would not show up for a House Judiciary Committee hearing Thursday because the Democratic-led panel had overruled Barr’s objections and would allow staff lawyers to question him. A department spokeswoman called those conditions “unprecedented and unnecessary.”

Barr’s boycott marked a new escalation in the raging political battle between the White House and House Democrats, who have stepped up their investigations of Trump since release of Mueller’s report two weeks ago.

The administration has refused to comply with a House Ways and Means Committee request for Trump’s tax returns and refused to give the House Judiciary Committee an un-redacted copy of Mueller’s final report.

The president also has sued the chairman of the House Oversight and Reform Committee to block a subpoena for information about his businesses and sued a bank and accounting firm to stop it from complying with subpoenas seeking his financial records.

Rep. Jerrold Nadler, D-N.Y., chairman of the House Judiciary Committee, said Barr was “trying to blackmail the committee” to change its rules, and members would consider issuing a subpoena to get him to testify.

“Congress cannot permit the executive branch, the administration, to dictate to Congress how we operate,” he said. He told the Washington Post, “if good-faith negotiations don’t result in a pledge of compliance . . . the next step is seeking a contempt citation against the attorney general.”

During his Senate testimony Wednesday, Barr repeatedly pushed back at his critics, calling the controversy over how he characterized Mueller’s work “mind-bendingly bizarre” because a lightly redacted version of the full 448-page report was subsequently made public.

He said he was “absolutely” confident in his judgment that the president did not try to unlawfully impede the investigation, and he was “frankly surprised” that Mueller did not reach a conclusion on whether Trump obstructed justice.

“I think that if he felt that he shouldn’t go down the path of making a traditional prosecutorial decision, then he shouldn’t have investigated,” he said.

He also dismissed a letter of complaint from Mueller as a “bit snitty,” a hint of the growing friction between the attorney general appointed by Trump and the former FBI director who investigated the president.

Mueller wrote Barr on March 27, three days after the attorney general had provided Congress with what he described as a summary of Mueller’s conclusions. In his written response, the special counsel said Barr failed to “fully capture the context, nature and substance” of the investigation and contributed to “public confusion about critical aspects of the results.”

Despite that complaint, Barr contended that Mueller was not concerned with the accuracy of his summary but with how it was being reported by the media. And he argued that release of Mueller’s report rendered those objections moot.

A veteran lawyer, Barr appeared calm and occasionally folksy during the five-hour hearing, at one point saying that after Mueller handed in the report, “it was my baby.” But he parsed his answers carefully and gave little ground to his critics, including some Democrats who called for him to resign. 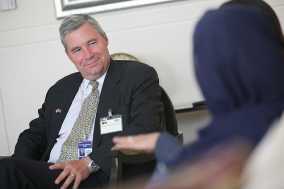 The hearing was the latest skirmish in the partisan warfare that has characterized the Russia investigation since it began in mid-2016. Democrats called for Barr to resign or at least recuse himself from investigations emerging from the Russia inquiry, while Republicans pounded the FBI and Justice Department for their conduct at the start of the probe.

“This attorney general lacks all credibility and has, I think, compromised the American public’s ability to believe that he is a purveyor of justice,” Sen. Kamala Harris, D-Calif., who is running for president, said after the hearing.

Sen. Dianne Feinstein, D-Calif., the ranking Democrat on the committee, pressed Barr about his conclusion that Trump did not obstruct justice during the investigation.

“Contrary to the declarations of the total and complete exoneration, the special counsel’s report contained substantial evidence of misconduct,” she said.

Republicans rallied around Barr, praising his handling of the Russia investigation and his willingness to look into what they alleged were glaring problems in how it was conducted.

Sen. Lindsey Graham, R-S.C., the committee chairman, focused on whether the inquiry was tainted by political bias from the start, noting that an FBI agent and an FBI lawyer had traded private text messages disparaging Trump.

“This committee is going to look long and hard at how all this started,” Graham said.

Republicans repeatedly returned to the FBI’s use of a dossier of unverified allegations compiled by a former British spy working for Democrats during the campaign. Sen. John Cornyn, R-Texas, asked whether Barr could state with confidence that the dossier was not part of a Russian disinformation effort.

“I can’t state that with confidence,” Barr said. He added that it was not “entirely speculative” that Russian operatives may have purposefully supplied false or misleading information to the former British spy, Christopher Steele.

Barr said he will review the court-approved surveillance of a former Trump campaign aide during the 2016 campaign, and he defended his description of the eavesdropping as “spying,” saying it was not meant as a pejorative term.

“I think ‘spying’ is a good English word,” he said.

Barr said he could not “fathom” why the Obama administration didn’t brief the Trump campaign about the Kremlin’s efforts to interfere in the election. Intelligence officials put out a public statement on Oct. 7, 2016, saying Moscow was behind hacks of Democratic Party emails, but they had tracked the Russian operation since the summer.

Barr, a longtime proponent of expansive presidential power, said Trump was justified in believing the Russia investigation was unfair because Mueller couldn’t find evidence of a conspiracy between the campaign and Moscow. He said the president had authority under the Constitution to try to shut the inquiry down.

“If it was groundless, based on false allegations, the president does not have to sit there constitutionally and allow it to run its course,” Barr said. “The president could terminate that proceeding and it would not be a corrupt intent because he was being falsely accused. He would be worried about the impact on his administration.”

However, Barr appeared uncomfortable when Harris asked whether Trump or others at the White House had “asked or suggested” he open an investigation.

Barr stammered, then asked her to repeat the question. “I’m trying to grapple with the word ‘suggest,”’ he said. “I mean, there have been discussions of matters out there. They have not asked me to open an investigation.”

Trump has previously said the Justice Department should be investigating Hillary Clinton, his Democratic opponent in 2016.

Mueller did not say in his report whether Trump had committed the crime of obstructing justice, saying it would be unfair to reach such a determination because a president cannot be indicted while in office.

Barr and Deputy Attorney General Rod Rosenstein, who appointed Mueller and supervised his work, concluded that Trump had not violated the law.

Democrats pressed Barr on whether Trump’s behavior was appropriate, noting that Mueller documented the president’s attempts to fire the special counsel and otherwise impede the investigation.

At each turn, Barr provided an interpretation of the evidence most favorable to Trump.

When Sen. Amy Klobuchar, D-Minn., who is running for president, noted that Trump criticized potential witnesses for “flipping” and cooperating with prosecutors, Barr said Trump was only casting aspersions on people who lied to reduce their own prison sentences.

Barr also refused to pass judgment on Trump’s actions. Hirono asked Barr whether it was “OK” for the president to ask Donald McGahn, his first White House counsel, to lie, one of the findings in the report.