The President wants to revoke the clearances of John Brennan, Comey, Clapper, Hayden, Rice, and McCabe… 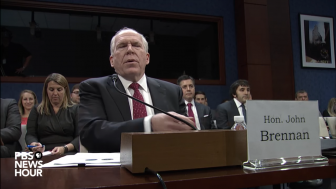 (AFP) The White House said Monday it was looking into revoking the security clearances of former CIA director John Brennan, a prominent critic of President Donald Trump, and several other top former US officials.

“The president is looking to take away Brennan’s security clearance,” White House spokeswoman Sarah Sanders said at a press briefing.

“He’s also looking into the clearances of Comey, Clapper, Hayden, Rice, and McCabe,” she said.

Brennan, who headed the CIA under president Obama, Comey, Clapper and Hayden, in particular, have emerged as harsh critics of Trump.

She accused them of “making baseless accusations (against Trump) of improper contact with Russia.”

“It’s extremely inappropriate, and the fact that people with security clearances are making baseless charges provides inappropriate legitimacy to accusations with zero evidence,” she said.

Special counsel Robert Mueller is investigating whether any members of Trump’s election campaign colluded with Russia, a probe the president has denounced as a “total witch hunt.”

Clapper, interviewed by CNN, described the White House move as a “very, very petty thing to do.”

Asked if the action was political, Clapper said “I don’t know how you present it any other way.”

“This is kind of a petty way for retribution, I suppose, for speaking out against the president,” he said.

Hayden, a former Air Force general who headed the CIA and the top secret National Security Agency under president George W. Bush, said the move “won’t have any effect on what I say or write.”

“I don’t go back for classified briefings,” Hayden said on Twitter.

A spokeswoman for McCabe, Melissa Schwartz, tweeted that his “security clearance was deactivated when he was terminated (in March), according to what we were told was FBI policy.”

“A very clear message from the White House: criticize the President publicly and he will put the machinery of the government at work to punish you,” Beyer said.

Earlier Monday, Republican Senator Rand Paul said on Twitter that he would suggest revoking Brennan’s security clearance at a meeting with Trump.

“Is John Brennan monetizing his security clearance?” Paul asked. “Is John Brennan making millions of dollars divulging secrets to the mainstream media with his attacks on @realDonaldTrump?”

According to The Washington Post and The New York Times, former top US officials often maintain their security clearances so they may provide insights to their successors and work with companies which are engaged in classified programs.