‘It is clear to us that our hopes, our lives, our investments and our existence have been relegated to an acceptable level of collateral loss…’

(Ben Sellers, Liberty Headlines) In the twilight days of his presidency, Barack Obama decreed by executive order a massive land-grab to assert federal control over state- and privately owned land by declaring it a national monument.

“With the stroke of his pen, President Obama locked up 1.35 million acres … in Utah with his unilateral Bears Ears Monument designation,” said a recent press release from the Congressional Western Caucus, criticizing the theft.

Over the course of his presidency, in fact, Obama took more than 550 million acres of land and water—nearly 865,000 square miles—which amounts to more than the total land area of Alaska and Texas combined (833,738 square-miles) with enough room left over to add Maine (30,862 square-miles). 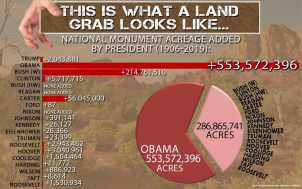 All in all, the CWC said, the federal government owns close to half of the land in the western U.S.

However, President Donald Trump’s modest return of about 3,200 square miles—approximately the size of Rhode Island and Delaware combined (2,999 square-miles)—was met with an outsize, hysterical response from the conservationist lobby, whose partisan disinformation campaign seeped into everything from social media to travel articles.

On Wednesday, the CWC held a hearing to address the Left’s brazen exploitation of the 1906 Antiquities Act.

“They continue to perpetuate the falsehood that recent national monument designations have been locally-driven and done out of genuine concern for the protection of antiquities,” said the CWC press realease.

The hearing came in response to a separate hearing from the House Natural Resources Committee, which criticized Trump’s Interior Department for its audacious reapportionment of the monuments to the “smallest area compatible with the proper care of the objects to be protected,” in keeping with the legal parameters defined by the Antiquities Act.

“The reality is that the Obama and Clinton Administrations, urged on by well-heeled activist groups, abused their executive authority to lock-down massive amounts of land—without public review and irrespective of whether legitimate antiquities were protected in the process,” said the press release.

The CWC hearing included private property owners, energy and natural-resources advocates, representatives of American Indian tribes, and others who were adversely impacted by the previous administration’s actions.

“When the Bears Ears National Monument was originally made by President Obama, it was a very upsetting day,” said Suzette Morris, vice president of the Stewards of San Juan County and a member of Ute Mountain Ute Tribe, who dispelled the false narrative that Obama’s expansion of the southeastern Utah national monument was meant to preserve tribal lands.

“Our voices had not only been forgotten, they had been silenced by special interest groups funded by Hollywood actors, and by tribes who do not live anywhere near Bears Ears,” Morris said. “… They chose to ignore our voices and supported the Obama monument in secret rather than hearing our point of view. They did not ask us to support the monument, because the majority of us do not.”

Trump’s restoration of stolen land in the uranium-rich Bear Ears has been a focal point of much of the controversy, but others criticized the Left’s efforts more broadly, saying the Antiquities Act has been warped from its intended purpose of safeguarding resources into a means of imposing additional regulations and fees on the regions’ established industry and agricultural enterprises.

Steve Wilmeth, a rancher from Luna and Dona Ana County, N.M., said his private property—and means of livelihood—happened to be in the wrong place when Obama created the Organ Mountain Desert Peaks National Monument.

Wilmeth said 40 percent of the ranch now lies within the boundaries of the monument, but that the government staff overseeing it effectively asserts control over 100 percent of his enterprise by also claiming administrative purview of lands within the designated monument’s “footprint.”

“It is clear to us that our hopes, our lives, our investments and our existence have been relegated to an acceptable level of collateral loss,” Wilmeth said. “…We have one pasture that will have at least three overlapping management plans.”

“President Trump is doing what should have been done long ago, carefully reviewing egregious national monument designations of previous Administrations that usurped power from the people and right sizing these monuments,” Gosar said.

His attack, ironically, seemed to parallel the rhetoric that some Trump opponents themselves have used to condemn the recent national emergency declaration for securing border wall funds.

“No president should have exclusive authority to circumvent Congress and singlehandedly rip away millions of acres of land and water from the American people and indigenous communities,” Gosar said.