EXCUSE: ‘We at the Post are merely glad we are getting a break for the holidays…’ 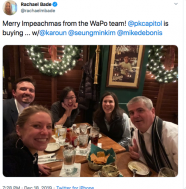 (Claire Russel, Liberty Headlines) A Washington Post reporter and her colleagues appeared to celebrate the House of Representatives’ vote to impeach President Donald Trump early Thursday morning, which she tweeted with a selfie of the group with a greeting of “Merry Impeachmas from the WaPo team!”

Bade later clarified that the image was not an “endorsement” of any kind.

I’m deleting a tweeting tonight that is being misinterpreted by some as an endorsement of some kind. To be absolutely clear, we at the Post are merely glad we are getting a break for the holidays after a long 3 months. I will retweet the group photo w/ a better caption !

The Trump 2020 campaign was quick to point out how biased the caption was.

Ladies & gentlemen, your fair and objective press corps in action! What a joke.

Media needs to stop acting like they are “impartial”. https://t.co/F89tPhbRZT

Several others pointed out that the meaning of “Merry Impeachment” was obvious:

I think we all know what “Merry Impeachmas” meant but ok

So what exactly did you mean by “Merry impeachmas”? 🤔

The moral of the story here is never tweet.

And other Twitter responders weren’t buying it, and gave Bade a roasting:

If you’re not fired by sunrise then @washingtonpost has no credibilityhttps://t.co/YfCgBtwBB9

lol no one believes this

This is #ImpeachmentDay not April Fools. Fake News Scum.

It was the best day of her life….. and she just had to tweet about it. I see a cardboard box and a bottle of Thunderbird in her future.