‘It is one that makes sense from her point of view…’

(Liberty Headlines) As her rivals head to the exits, Elizabeth Warren is vowing to press on to a contested convention.

For Warren, it’s either a high-risk strategy born of necessity or a last-gasp bid to persuade supporters in delegate-rich Super Tuesday states to stick with her. Either scenario underscores the perilous position the once-promising candidate finds herself in as she weighs her future in the 2020 race.

Warren hasn’t won — or even challenged for the lead — in any of the first four states, and it’s unclear where she’ll win on Tuesday, beyond her home state of Massachusetts. Yet her campaign is suddenly flush with cash after standout debate performances, and unlike some candidates, she has a robust infrastructure in states across the country, even some voting beyond Super Tuesday. Warren also hasn’t faced the same intense pressure to drop out that felled some of her more moderate rivals, like Pete Buttigieg and Amy Klobuchar, both of whom endorsed former Vice President Joe Biden.

Several Democrats said Warren’s standing as the most prominent woman left in the race has also afforded her something of a grace period to assess her campaign’s future. But they said if she continues to struggle on Tuesday and still presses forward toward the convention, that sentiment could quickly flip.

Warren campaign manager Roger Lau raised the prospect of a convention fight when Democrats gather in Milwaukee this summer in a strategy memo released Sunday. He said that internal campaign projections show Warren winning delegates in nearly all 14 Super Tuesday states, and that no candidate will likely emerge from a day packed with contests on a path to securing a majority of the delegates.

“Our grassroots campaign is built to compete in every state and territory and ultimately prevail at the national convention in Milwaukee,” Lau wrote. 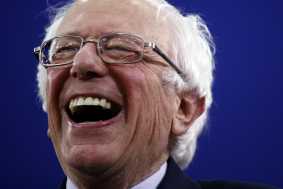 Democrats have bristled at the prospect of a contested convention, which would likely pit Vermont Sen. Bernie Sanders against a slightly less extreme rival and almost certainly leave the party deeply divided heading into the general election.

Sanders surged to the front of the field after the first three contests but faces new pressure from a resurgent Biden, who saved his campaign with a sweeping victory in South Carolina and saw a surprising number of his party’s anti-Bernie contingent swiftly come together to rally behind him on Monday. A wild card remains billionaire Mike Bloomberg, the former New York mayor who has also spent historic sums of money in Super Tuesday states, where he’ll appear on the ballot for the first time.

In a convention fight between Sanders and a more moderate candidate, some Democrats suggest Warren’s role would be to emerge as a consensus alternative: radical enough for Sanders’s supporters and tolerable for average liberals as well.

AP VoteCast data, a wide-ranging survey of voters in the South Carolina Democratic primary, shows that a majority of both Biden and Sanders supporters would be satisfied with a Warren nomination. But that satisfaction drops among Sanders backers if Biden were to be the nominee, and the same goes for Biden supporters with Sanders. By contrast, Bloomberg is the only major candidate who would leave a majority of all those surveyed dissatisfied.

“I am in no way saying it’s a winning scenario, but it is one that makes sense from her point of view,” said Kelly Dietrich, a veteran Democratic fundraiser and CEO of the National Democratic Training Committee.

Warren soared to the top of the Democratic field last summer, casting herself as a wonky leftist armed with a litany of plans for the nation’s problems. She pulled in tens of millions of dollars despite eschewing traditional high-dollar fundraising.

But her campaign flagged toward the end of the year, and she struggled in the opening weeks of 2020 to find another gear. She finished a respectable third in Iowa but slipped to fourth in New Hampshire and Nevada and fifth in South Carolina.

Yet she has found new energy in recent days, leveling fierce attacks against Bloomberg, particularly regarding nondisclosure agreements his company entered into with women. She’s also stepped up her critiques of Sanders, her closest ideological counterpart in the race, arguing that she would be more effective at implementing the policies they both support.

Campaigning in California on Monday night, Warren made clear she has no immediate plans to drop out of the race, saying, “We’re looking forward to gaining as many delegates as we can tomorrow.”

She also took a swipe at Biden and the party’s establishment wing coalescing around him, saying, “But no matter how many Washington insiders tell you to support him, nominating fellow Washington insider will not meet this moment.”

Warren’s feistier posture contributed to a boost in fundraising: $29 million in February, more than enough to keep her campaign afloat through Super Tuesday and well beyond.

But getting to the convention means Warren needs to keep racking up delegates, not just performing well in debates. Heading into Super Tuesday, Sanders leads the overall race for delegates with 58, while Biden has 50. Warren trails far behind with eight — and hasn’t captured any since Iowa.

Warren supporters say that they’re hoping to nab delegates Tuesday in places like Colorado, Texas and California and that she could perform well in Washington state, which votes a week later — if her campaign lasts that long.

Adam Green, co-founder of the Progressive Change Campaign Committee, predicted Warren “could have hundreds of delegates” coming out of Super Tuesday.

“It’s perfect timing for Warren to have this happen right before Super Tuesday,” Green said of Buttigieg and Klobuchar leaving the race.

But then there’s Massachusetts. In a show of force, Sanders attracted 10,000-plus supporters to a rally in Boston Common, a few miles from Warren’s home, on Saturday. His team is openly predicting victory in the state.

A home turf defeat would likely increase the pressure on Warren to suspend her campaign. Her advisers did not respond to questions on Monday about her plans under that scenario.

Even if Warren were to drop out after Super Tuesday, she could still increase her own leverage at a convention if she picks up delegates this week. Candidates who acquire delegates get more say in who sits on the convention’s powerful platform committee, which would give Warren a voice in outlining the Democratic Party’s policy priorities and could guarantee that her focus on economic inequality is at the forefront.

“There will be discussions between people at the convention, and (Warren) is going to be a very powerful voice in those discussions,” said Randi Weingarten, president of the American Federation of Teachers, who has personally endorsed Warren, even though her union merely urged its members to back Warren, Sanders or Biden.