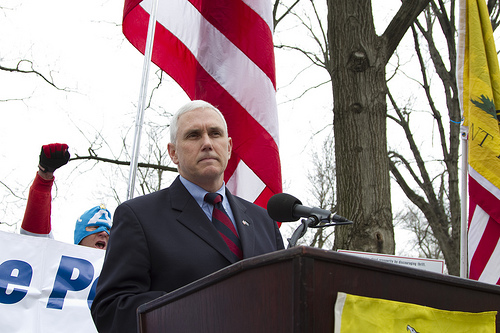 Instantly he was challenged by the most listened-to talk radio host in the nation, after many conservatives in the media and in outside groups blasted the plan for its failure to keep many campaign promises.

“If this is what happens, Mr. Vice President, why vote Republican?” Limbaugh asked. “What is the point of voting Republican if the Democrats are gonna continue to win practically 95 percent of their objectives, such as in this last budget deal?”

Pence called the agreement “a clear win for the American people,” and praised the president for his negotiation capabilities and commitment to national defense.

“Look,” the vice president responded to Limbaugh, “you’ve had Washington, D.C., that has been, you know, paralyzed by gridlock and partisan infighting for many years, and in this new president you have someone who was able to bring people together and make a $21 billion increase in defense spending at a time of great challenge for America’s interests around the world.”

Pence claimed Trump was able to get Democrats to back off years of the habit of demanding increases in domestic spending in exchange for higher spending on protecting the country. He said “this ended that.”

But Limbaugh pushed back.

“There isn’t anything of the president’s agenda in this budget,” he added, “and people are beginning to ask, ‘when’s that gonna happen?'”

Pence stuck to his guns on Trump’s priorities to strengthen the military, which he said was the largest increase in spending since the Reagan administration. He also said protecting the homeland was boosted in the budget deal also.

“This bill includes the largest increase in border security funding in 10 years, with enough, as the president said to make a down payment on a border wall,” the vice president said in the interview. “We’re replacing ineffective and failing fencing and wall with an unbreakable barrier. We’re beginning to build the wall already, and look at the statistics, Rush. Illegal immigration, border crossings, are down more than 60 percent….”

The vice president promised the budget agreement represented only five months that will “move the ball forward on the priorities of the American people.”

“When the next budget comes around next fall you’ll see even more of President Trump’s leadership and priorities reflected,” he said.

Limbaugh rebutted, saying conservatives are fed up with Republicans who say “we’ll get ’em next time” and “kick(ing) the can down the road.”

“You guys were sent there to drain the swamp,” he said, challenging Pence. “There’s a clear Trump agenda that just isn’t seeable.

“It’s not visible in this budget, and some people are getting concerned that there’s more concern for bipartisanship and crossing the aisle, working with Democrats, than there is in draining the swamp and actually peeling away all of the roughage that is preventing actually moving forward here on so many of these issues that affect people domestically.”

Pence insisted progress is underway under the Trump administration, citing successes from the first 100 days since the president’s inauguration.

“He signed more bills into law than any president in the first hundred days since Harry Truman,” Pence said. “Thirteen different bills rolling back an avalanche of regulation and red tape on businesses across this country, 500,000 jobs have been created since the first of the year.

And Pence reinforced his loyalty to serving beside President Trump.

“This president is fighting every single day…to advance his agenda, and I couldn’t be more proud to be standing shoulder to shoulder with him.”