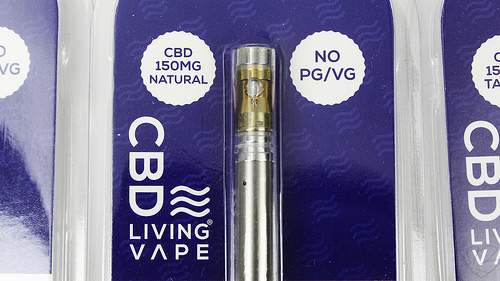 (Mari A. Schaefer, Philadelphia Inquirer) There is another warning sign that e-cigarette use is affecting the behavior of American youths.

Nearly 1 in 11 U.S. middle and high school students reported using cannabis while vaping, a study by epidemiologists at the Centers for Disease Control and Prevention found. That number translates to about 2 million youths. The study was published Monday in the journal JAMA Pediatrics.

The results came from the 2016 National Youth Tobacco Survey that asked 20,675 students in the sixth through 12th grades in both public and private schools if they had ever used an e-cigarette device with a substance besides nicotine, including marijuana, hash oil or THC wax, a product that concentrates the hallucinogenic chemical in marijuana.

Of those students who are already using e-cigarettes, one in three high school students and one in four middle school students reported using cannabis while vaping, researchers found.

The use of cannabis in e-cigarettes was significantly higher among males and those who had previously used e-cigarettes, said Katrina Trivers, the study’s primary author and an epidemiologist in the CDC’s Division of Cancer Prevention and Control.

The study findings reinforce the importance of reducing all forms of e-cigarette use, Trivers said.

The results are consistent with other studies on marijuana and vaping, the study authors reported.

Terri Randall, a psychiatrist at Children’s Hospital of Philadelphia, said while the higher numbers are surprising, the fact that teens are vaping with marijuana is not.

“There is a perception among youth that using e-cigarettes is safer than regular cigarettes and less harmful with marijuana,” she said.

But the National Academy of Sciences found cannabis use in young people can negatively affect learning and memory, likely because their brains are still developing.

And it’s easier to hide marijuana use when it’s vaped rather than smoked. Marijuana emits the same kind of vapor as nicotine liquid, and doesn’t smell as strong as when it is burned.

“That allows them to use marijuana without being concerned,” she said.

Last week Scott Gottlieb, the U.S. Food and Drug Administration commissioner, called youth vaping an epidemic. He ordered the manufacturers of e-cigarettes — including Juul, Vuse, Blu, MarkTen XL and Logic — to show how they will restrict sales of e-cigarettes to minors or risk having their products pulled from the market. The agency criticized the makers’ use of fruit and candy flavors that appeal to children, but stopped short of banning them, as some health advocates have demanded.