‘Stop this onslaught, this invasion into our country…’

(AFP) Mexico made a last-ditch push Tuesday to avoid the punishing import tariffs Donald Trump has threatened to slap on his southern neighbor, as the US president demanded it put an end to a migrant “invasion.”

Top Mexican officials braced for talks in Washington seeking to avoid economic disaster by getting Trump to shelve his threat to impose the punitive five percent duties beginning June 10.

With pressure boiling, members of Trump’s Republican party were reportedly considering a brazen legislative move to block the president’s tariffs, something Trump himself warned would be a “foolish” act.

Speaking before a high-stakes meeting between Mexican officials and US trade representative Robert Lighthizer, Foreign Minister Marcelo Ebrard said he predicted an “80 percent” chance of success in negotiating a way out.

But after stepping up the pressure with a Monday tweet saying Mexico should “immediately” stop the flow of migrants and drugs towards the southern border, Trump doubled down during his state visit to Britain.

Even as Ebrard spoke of hopes for reaching “common ground,” Trump bluntly told reporters in London it was “more likely” than not that the tariffs go into effect next week.

“Mexico should step up and stop this onslaught, this invasion into our country,” Trump said at a joint press conference with outgoing British Prime Minister Theresa May.

Trump has said the tariffs would rise steadily to 25 percent by October if Mexico does not substantially stem the flow of undocumented migrants, mainly from Central American countries, arriving at the US southern border.

The US leader’s shock tariff announcement pummelled the Mexican currency and sent markets in both countries tumbling over fears of a sharp slowdown in trade and high prices for imported goods on both sides of the border.

Mexico has said the tariffs would be “counterproductive,” but the White House reiterated this week that Trump’s threat is serious.

US lawmakers including Republicans have warned that the tariff plan could scuttle the massive free trade agreement being finalized between Mexico, the United States and Canada, that is set to replace the longstanding NAFTA.

The new deal, called USMCA, is currently in the process of ratification by the legislatures of the three countries. 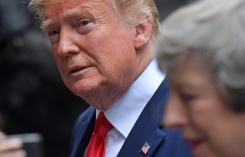 AFP/President Donald Trump did not hesitate to weigh in once more on his threat to impose punitive tariffs on Mexican goods, despite being on a state visit to Britain

The Washington Post reported that US Republicans were discussing whether they would have to block Trump’s planned new tariffs, a move that would trigger the most dramatic act of defiance from within the president’s party since he took office in 2017.

Trump brushed aside the threat, saying he did not believe Republicans would follow through.

“If they do, it’s foolish,” he said. “There’s nothing more important than borders. I’ve had tremendous Republican support.”

But several of Trump’s allies were insistent that Trump pull his tariff threat.

Ebrard is scheduled to meet Wednesday with Secretary of State Mike Pompeo and provide data showing Mexico’s commitment to stemming the migrant flow.

The top Mexican diplomat earlier told reporters that Mexico had already prevented 250,000 migrants from traveling to the US border by taking a series of steps, including letting US asylum seekers remain in Mexico while their applications are reviewed.

Ebrard added that the only solution to the crisis is a comprehensive development plan for Guatemala, El Salvador and Honduras, where most of the migrants come from.

In March, Trump cut off aid to the three nations, insisting they weren’t doing enough to stop the flow of migrants to the United States. He has also more than once threatened to close the US border with Mexico.