Growth likely would have been even stronger without the government shutdown… 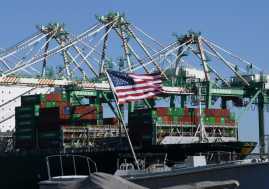 AFP/Americans imported fewer goods and took fewer vacations, which helped growth in the first quarter but could be a negative in coming months

(AFP) The US economy kicked into high gear in the first three months of the year, quashing fears of a slowdown, the government reported Friday.

The unexpected surge will be welcome news for President Donald Trump, who rattled the economy by shutting down the government for five weeks in December and January in a battle with Democrats over funding for a border wall.

GDP expanded at an annual rate of 3.2 percent in the January-March period, smashing economists’ expectations and surpassing the 2.2 percent growth in the final quarter of 2018, the Commerce Department said it its initial estimate.

The hotter growth was driven by a dip in imports, a bump in spending by state and local governments, faster inventory building by companies and some recovery in home sales.

And officials said it would likely have been even stronger without the government shutdown because dip in spending by government workers likely shaved 0.3 percentage points off growth in the quarter.

It was the strongest performance for a first quarter in four years, but the growth estimate will be revised in May and June as more data come in.

But the rosy numbers nevertheless came with a few signs of weakness.

The White House rejected concerns about a slowdown amid signs of declining retail sales and manufacturing, and remained steadfast in its predictions that the boost from tax cuts would continue to drive growth.

As the broad field of Democratic presidential candidates begin honing their messages ahead of next year’s elections, resilient US growth could offer Trump some protection from criticism of his economic stewardship.

But there are signs for concern in the data.

Consumer spending slowed sharply from the final quarter of 2018, weighed down by a 5.3 percent drop in purchases of durable goods like light trucks, electronics and metals — the biggest tumble in more than nine years.

Corporate investments — a principal White House argument in favor of the 2017 tax cuts — slowed as well, with firms buying less agricultural machinery amid a protracted trade war with China and less office furniture.

In addition, the government shutdown immobilized major federal services on which much of the economy depended, such as oil drilling permits, food inspection and ice-breaking at commercial ports.

Spending by the federal government was unchanged as a result but state and local government outlays rose 3.9 percent, the largest increase in three years, as states and cities spent more on building highways and streets.