Concern over risk of spreading HIV through the blood supply… 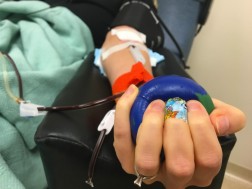 (Liberty Headlines) The U.S. government Thursday eased restrictions on blood donations from homosexual men and other key groups because of a drop in the nation’s blood supply triggered by the Wuhan virus outbreak.

The Food and Drug Administration’s new policy aims to allow tens of thousands more Americans give blood, including gay and bisexual men and people with recent tattoos and piercings.

Canceled blood drives have been devastating to the American Red Cross and other nonprofits that provide most of the blood supply. Last month, the Red Cross estimated there have been 86,000 fewer blood donations in recent weeks because blood drives were canceled at workplaces, colleges and other locations.

The FDA’s previous rules barred donations from men who have had sex with a man in the previous year.

The same policy applied to women who’ve had sex with gay or bisexual men and people who’ve received tattoos and piercings in the past year.

Under the new policy, the disqualifying time period was reduced to three months.

FDA officials said the move to three months matches recent changes in the United Kingdom and other developed countries.

The FDA on Thursday made similar changes to restrictions for people who have recently traveled to countries where malaria exposure is a risk.

The agency said it expects the changes to remain in place after the pandemic ends.

The U.S. and many other countries have long restricted donations from gay and bisexual men and several other groups due to the risk of spreading HIV through the blood supply.

In 2015, the FDA moved from a total ban to the one-year abstinence period for men who have sex with men.

Donated blood is screened for a number of infectious diseases, including HIV. The Wuhan virus can’t be spread through blood.