Hawaii activist: ‘Our identity has been erased, beaten, battered and thrown to the side…’ 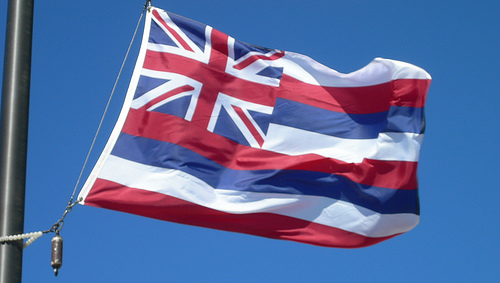 (The College Fix) This past Wednesday, a group of about 15 University of Hawaii-Maui Native Hawaiian students and activists stole US and Hawaii state flags from around campus to protest the United States’ “historical oppression of the islands.”

Specifically, they say the US flag should not fly above the Hawaiian state flag.

“Our identity has been erased, beaten, battered and thrown to the side,” a man wrapped in a Hawaiian flag said to those assembled before UH Chancellor Lui Hokoana.

“We’re here today to say, ‘No, we’re still here.’ We’re here to communicate to the leadership at MCC that the American flag cannot fly above the Hawaiian flag any longer because of its symbolic oppression of the illegal overthrow” of Hawaii.

UH President David Lassner and campus chancellors agreed to implement a “two-flag approach” that, The Maui News reports, is already used at the State Capitol and other UH campuses: The US and Hawaii flags will be flown on separate poles at the same height.

Hokoana said he has been trying to get a second flagpole constructed, but the work has not been completed. In the interim, the college will not use its current flagpole and instead post the two flags on separate 7-foot indoor poles outside the Wong Conference Room.

The college will use this flag standard until the construction of the second flag pole is completed, Hokoana said…Original Source…