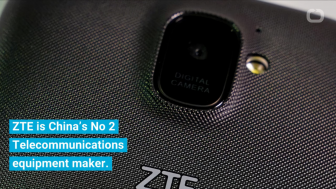 Washington (AFP) – The US Senate defied President Donald Trump by voting Monday to overrule his administration’s deal with Chinese telecom firm ZTE and reimpose a ban on high-tech chip sales to the company.

Senators added an amendment targeting ZTE into a sweeping, must-pass national defense spending bill that cleared the chamber on an 85-10 vote.

The company has been on life support ever since Washington said it had banned US companies from selling crucial hardware and software components to ZTE for seven years, after staffers violated trade sanctions against Iran and North Korea.

It was fined $1.2 billion for those violations, but earlier this month the Trump administration gave ZTE a lifeline by easing sanctions in exchange for a further $1.4 billion penalty on the company.

The Senate measure nullifies that action, proposing an outright ban on the government buying products and services from ZTE and another Chinese telecoms firm, Huawei.

“We’re heartened that both parties made it clear that protecting American jobs and national security must come first when making deals with countries like China, which has a history of having little regard for either,” a bipartisan group of senators said.

Hong Kong-listed shares in ZTE plunged more than 20 percent soon after the opening bell on Tuesday. The company has lost around 60 percent of its value since it resumed trading last week after a two-month suspension that followed the initial ban.

The lawmakers who introduced the amendment include top Democrat Chuck Schumer and Republican Marco Rubio.

Providing $716 billion in funding for national defense for fiscal year 2019 and giving policy guidance to the Pentagon, the bill is not a done deal.

The House of Representatives passed its own version of the measure, and the two chambers must now hash out a compromise.

“It is vital that our colleagues in the House keep this bipartisan provision in the bill as it heads towards a conference,” Schumer and Rubio said.

ZTE, which employs 80,000 people, said recently that its major operations had “ceased” after the ban, raising the possibility of its collapse.

Its fiberoptic networks depend on US components and its cheap smartphones sold en masse abroad are powered by US chips and the Android operating system.