Giuliani’s charge came a day after Trump Tweeted that the Mueller probe is a “Rigged Witch Hunt” and a “Democrat Con Job!”… 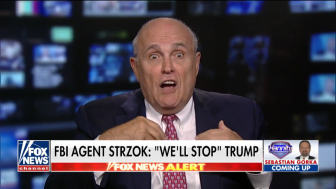 Washington (AFP) – A lawyer for US President Donald Trump on Sunday sharpened his attacks on the special counsel inquiry into possible Trump campaign collusion with Russia, calling it “the most corrupt investigation that I’ve ever seen.”

That charge by lawyer Rudy Giuliani came a day after Trump himself launched a fresh attack on the investigation, assailing it in successive Twitter messages as a “Rigged Witch Hunt” and a “Democrat Con Job!”

The investigation, headed by former FBI director Robert Mueller, has widely been expected to wind up in the next few months — possibly after a Mueller interview with Trump — but Giuliani said such a meeting now seemed increasingly unlikely.

Earlier this year Giuliani had said a meeting could take place in weeks; he then extended that time frame. Asked Sunday on ABC’s “This Week” whether he has now determined there would be no interview, he said, “We have not (but) we’re close to determining that.”

Trump and his advisers have hammered at the notion that several members of Mueller’s team are affiliated with the Democratic Party and cannot be objective.

Giuliani, a former federal prosecutor, was asked on ABC whether Trump’s repeated attacks on Mueller and his team did not make it “seem as though he has something to hide.”

In reply, Giuliani asked the interviewer “how you can expect us to just walk up our client like a lamb to the slaughter.”

He also confirmed the gist of a New York Times article that said Trump’s side had added new conditions for any interview with Mueller. Giuliani told ABC that investigators must first show a “factual basis for the investigation.”

“We’ve been through everything on collusion and obstruction,” he said. “We can’t find an incriminating anything.”

Giuliani also said he did not believe Trump knew, beforehand or afterward, about a controversial meeting involving his son Donald Jr., some advisers and a Russian lawyer offering “dirt” on his election opponent, Hillary Clinton.

“I was probably there that day,” he said a bit cryptically, adding, “I don’t remember it.”

As a former New York mayor, Giuliani has known Trump for years and was reportedly considered as a possible attorney general.

Now 74, he joined the president’s legal team in April and has taken a lead in the push to bring the investigation to a quick close.