‘The first new wall project…is anticipated to start in April…’ 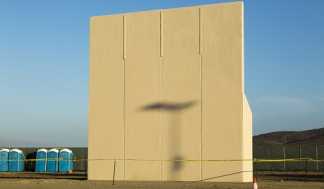 (DailyMail) The United States government has built no new border walls during the Trump administration, U.S. Customs and Border Protection confirmed exclusively to DailyMail.com on Thursday.

Border barriers erected between the U.S. and Mexico since Inauguration Day 2017 have consisted of supplements to existing walls and replacements for outmoded or decreipt sections.

‘The first new wall project, where no barrier currently exists, is anticipated to start in April,’ CBP spokesman Roger Maier said in an email.

He identified Hidalgo County as the construction project’s location, a border zone along a meandering 50-mile stretch of the Rio Grande.

CBP said last year that it was ‘designing and constructing approximately 25 miles of levee wall system’ in that county, whose anchor is the the border city of McAllen.

‘I will say, we’ve done a lot of renovation. And we have a lot of new wall going up where we took down wall because it was in such bad shape, and we put new wall up,’ he said.

Trump has been less ambiguous on other occasions.

He wrote on Twitter that ‘newly built walls’ were stopping caravans of Central American migrants from entering the U.S., and that ‘[w]e have already built large new sections’ in addition to ongoing renovations.

That appears to be untrue…Original Source…