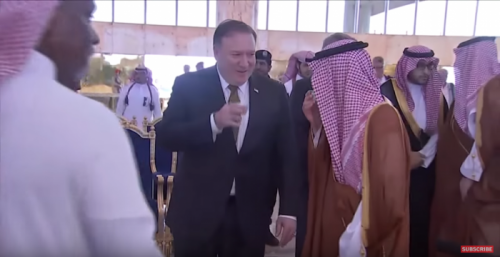 (Tracy Wilkinson, Los Angeles Times) The Trump administration said Wednesday it is canceling a 63-year-old treaty with Iran and part of a Vienna Convention on diplomatic rights in its latest assertion of U.S. sovereignty over the efforts of globalist agencies to obstruct sanctions.

The moves were more symbolic than substantive, and largely reflected Washington’s toughening tone with Tehran and with the Palestinian Authority, which are accused of continuing to support terrorism in the Middle East.

The State Department said it will formally withdraw from the 1955 Treaty of Amity with Iran, which affirmed friendly relations between the two nations, after a United Nations court ruled in Iran’s favor in a case that challenged newly imposed U.S. sanctions on Tehran. The court had ordered Washington to ease some sanctions, saying they violated the treaty’s provisions.

Secretary of State Michael R. Pompeo dismissed the ruling by the International Court of Justice, based in The Hague, Netherlands, as “meritless” and said the decision to scrub the little-known treaty was “39 years overdue,” a reference to the 1979 Islamic revolution that led to the seizure of U.S. hostages and put an anti-American theocracy in power.

Pompeo said staying in the treaty was “absolutely absurd” since the two governments broke diplomatic relations in 1980.

Under the 1961 accord, the same U.N. court had agreed to hear a challenge from the Palestinian government to Trump’s controversial decision to move the U.S. Embassy in Israel to the disputed city of Jerusalem.

“We will not sit idly by as baseless, politicized claims are brought against us,” Bolton said at the White House.

He said Iran had “made a mockery” of the 1955 treaty by supporting militant organizations in the Mideast, producing ballistic missiles and other malicious behavior. The treaty, which regulated commercial and consular rights, was one of several that emerged in the postwar period as Washington sought to enlist allies against the Soviet Union.

Bolton said the administration will review “all international agreements that may bind us” to “politicized” bodies.

“The issue is protecting the United States from the politicized abuse of these international institutions,” Bolton said.

During the U.N. General Assembly last week, Bolton described as “outright dangerous” the International Criminal Court, a separate judicial body created in 2002 to prosecute crimes against humanity, genocide and similar atrocities. The United States, along with Israel, China and several other countries, was never party to the ICC.

By contrast, the International Court of Justice was created in 1945 during the founding of the U.N. as the principal organ to resolve legal disputes between member states. The Vienna Convention on Diplomatic Relations is an international treaty that governs diplomatic disputes, treaty laws and consular relations, among other issues.

The administration did not seek to withdraw from the U.N. court, or from the Vienna Convention.

The decisions come amid worsening U.S. relations with Iran following Trump’s decision in May to withdraw from the Obama-era 2015 Iran nuclear deal. The administration re-imposed a raft of economic sanctions in August and has said it plans to add more stringent penalties on Nov. 4 in an effort to choke Iran’s oil exports, its principal source of income.

After Iran sued at The Hague, arguing that the sanctions violate the 1955 treaty, the international court rejected the Trump administration’s claim that it did not intend to harm the Iranian people.

The sanctions exempt medical supplies and food, but the restrictions make it difficult for Iranians to use international banks and other financial systems to import such goods, the court said. It ordered the U.S. to trim the sanctions to ensure humanitarian aid can be imported.

Iran praised the court ruling. “The decision proved once again that the Islamic Republic is right and the U.S. sanctions against people and citizens of our country are illegal and cruel,” the Foreign Ministry said in a statement.

The decision is legally binding, but Pompeo said the administration would continue to enforce sanctions with the existing exceptions for humanitarian goods and flight safety.

“The United States has been actively engaged on these issues without regard to any proceeding before the ICJ,” he said. He added, “We’re disappointed that the court failed to recognize that it has no jurisdiction to issue any order relating to these sanctions measures with the United States.”

Trump sought to rally support for his crackdown on Iran at the U.N. last week, but the other signatories to the nuclear accord—England, France, Germany, Russia and China—are trying to keep it afloat. All except Germany are permanent members of the Security Council, which had approved the Iran deal.