(AFP) President Donald Trump said on Sunday he wants and deserves to meet the anonymous whistleblower at the center of the fast-moving scandal that has triggered an impeachment probe against him.

The whistleblower, who could testify soon before Congress, fears for their safety if their identity is revealed, according to a lawyers’ letter released by CBS News.

Battling the deepest crisis of his presidency, Trump in a series of tweets railed against accusations that he should be impeached for urging Ukrainian President Volodymyr Zelensky to investigate Joe Biden, his potential 2020 White House challenger.

“Like every American, I deserve to meet my accuser, especially when this accuser, the so-called ‘Whistleblower,’ represented a perfect conversation with a foreign leader in a totally inaccurate and fraudulent way,” Trumped said.

“He wrote down and read terrible things, then said it was from the mouth of the President of the United States. I want Schiff questioned at the highest level for Fraud & Treason,” he wrote.

Trump’s Republican aides have sought to turn the tables on Democrats pushing for his impeachment, insisting that the president was the true “whistleblower” as he had asked Ukraine to investigate Biden and his son for corruption.

“Getting to the bottom of a corruption scandal in Ukraine is in the American national interest.” 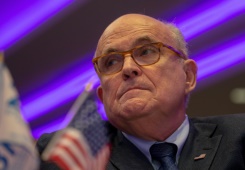 Trump’s personal lawyer Rudy Giuliani — who has emerged as his point man in the Ukraine scandal — led the charge along with Miller in combative Sunday talk show appearances.

Brandishing what he said were affidavits incriminating Biden’s son Hunter over his work at a Ukrainian company, Giuliani said Trump was duty bound to raise the issue with Kiev.

“If he hadn’t asked them to investigate Biden, he would have violated the constitution,” Giuliani told ABC’s “This Week,” charging that “Donald Trump was framed by the Democrats.”

Trump and his allies claim Biden, as Barack Obama’s vice president, pressured Kiev to fire the country’s top prosecutor to protect his son Hunter, who sat on the board of a gas company, Burisma Holdings, accused of corrupt practices.

Those allegations have largely been debunked and there has been no evidence of illegal conduct or wrongdoing in Ukraine by the Bidens.

But a transcript of the July call shows Trump pushing for Kiev to revisit the matter, saying both Giuliani and US Attorney General Bill Barr would be in touch.

For Democrats, that amounted to a smoking gun, leading Speaker Nancy Pelosi to finally approve an impeachment process she opposed as a risky distraction from the 2020 battle.

Pelosi on Sunday called for Trump to “speak the truth. Honor your oath of office to the Constitution of the United States.”

“Don’t make this any worse than it already is,” she said.

Democrats have charged aggressively into the inquiry, ordering Secretary of State Mike Pompeo to turn over Ukraine-related documents and scheduling witness testimony.

On NBC’s “Meet the Press,” Schiff said he expected the whistleblower to testify “very soon” — with all precautions taken to protect their identity.

CBS News released a letter from the whistleblower’s lawyers to the acting director of national intelligence expressing concern that their “client will be put in harm’s way.”

“We expect this situation to worsen and become even more dangerous,” the letter said, calling for “appropriate resources to ensure their safety.”

Democrats have said articles of impeachment — formal charges — against Trump could be completed in as little as a month and swiftly voted on in the House, where the party has a majority.

The Biden campaign sent a letter Sunday to TV networks to demanding they stop booking Giuliani for interviews, accusing him of “knowingly and willingly” lying.