In a second tweet Saturday, Trump suggested that the United States would be better off with no trade agreement than with a flawed NAFTA deal… 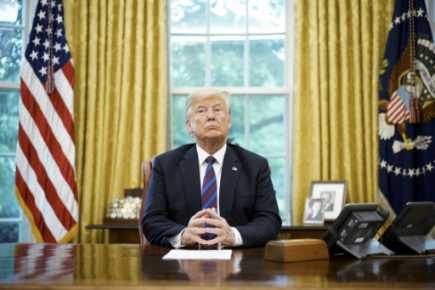 (AFP) US President Donald Trump on Saturday threatened to exclude Canada from NAFTA after negotiations to rewrite the pact ended without an agreement the night before.

“There is no political necessity to keep Canada in the new NAFTA deal. If we don’t make a fair deal for the U.S. after decades of abuse, Canada will be out,” he tweeted.

“Congress should not interfere with these negotiations or I will simply terminate NAFTA entirely & we will be far better off.”

US-Canadian trade talks are set to resume on Wednesday, and Ottawa and Washington still have time to reach an agreement that would keep Canada in the 25-year-old trade pact with Mexico.

But Trump’s tweet seemed designed to ramp up pressure on Canadian negotiators.

Earlier in the week, officials appeared close to reaching a deal that would rewrite the North American Free Trade Agreement, but leaked inflammatory comments from Trump — seen by some Canadians as suggesting he was bargaining in bad faith — threatened to upend the talks.

Trump has repeatedly denounced NAFTA as “one of the worst trade deals ever made,” language he repeated on Saturday.

The US and Mexico had announced a breakthrough accord on Monday, potentially leaving Canada out in the cold, but Ottawa’s foreign minister Chrystia Freeland insisted that a “win-win-win” agreement was within reach.

The White House notified Congress on Friday of its “intent to sign a trade agreement with Mexico — and Canada, if it is willing — 90 days from now.”

The White House now has 30 days to present the full text of a new agreement to Congress, which will give Ottawa and Washington time to iron out differences.

Trump’s caution to Congress to “not interfere with these negotiations” appeared to refer to one potential obstacle: the fact that lawmakers have empowered him to reach a so-called “fast track” agreement with both NAFTA partners, not just Mexico.

It is unclear how that will be sorted out.

In a second tweet Saturday, Trump suggested that the United States would be better off with no trade agreement than with a flawed NAFTA deal.

“We were far better off before NAFTA… We make new deal or go back to pre-NAFTA!” he said.

Sounding a more optimistic note, Freeland had said late in the week that “with good will and flexibility on all sides, I know we can get there.”

But she repeated that Canada would only sign an agreement that was in its national interest.

“Our officials are continuing to work toward agreement,” US Trade Representative Robert Lighthizer said in a statement, stressing the benefits to US workers and businesses.

The US-Mexico agreement laid out new rules for auto trade, and provided tougher protections for workers and intellectual property.

But the talks with Canada snagged over the mechanisms used to resolve disputes among partners, and on Ottawa’s strictly controlled dairy sector.

On Friday, a senior US official emphasized that Washington was ready to move ahead with just Mexico if Canada failed to sign on.

Mexican officials have made clear that they prefer an agreement that includes Canada.