‘The bottom line is all options are on the table right now. We are in a full blown emergency…’ 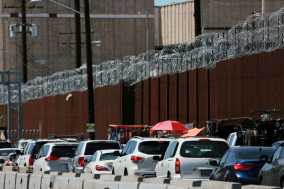 AFP/Border closure threat: motorists wait in line to cross the border into California from Mexicali, Mexico

(AFP) The Trump administration stepped up its threat to close down the US-Mexico border on Tuesday, warning both Congress and Central American governments to take action to stem the flow of migrants into the country.

“The president’s not threatening. He’s taking his job as the commander in chief very seriously in terms of protecting the American people,” White House spokeswoman Sarah Sanders said.

Closing the border is “not our first choice,” she said. However, she added, “Maybe that it’s the best decision.”

And DHS officials said border crossing times were already lengthening as they divert staff to areas between official ports to deal with tens of thousands of migrant families crossing illegally into the country.

A senior Homeland Security official, who declined to be named, told reporters that a definitive solution on border closures had not been made yet.

“The bottom line is all options are on the table right now,” he said.

“We are in a full blown emergency,” he said.

On Saturday Trump said in a tweet that he was prepared to shut border crossings to force Mexico to halt the flood of migrants fleeing poverty and violence in Central America.

Officials said the number being detained for crossing the border illegally has reached near 100,000 a month, mostly from Honduras, Guatemala and El Salvador.

“Mexico must use its very strong immigration laws to stop the many thousands of people trying to get into the USA. Our detention areas are maxed out & we will take no more illegals. Next step is to close the Border!”

The warning stirred fears across border populations who cross legally daily for business, family visits and other reasons.

But it also shook US and Mexican industry, who depend heavily on the open border for trade in everything from farm goods to auto parts.

DHS says that besides getting Mexico to block the transit of migrant caravans to the border, Congress should take immediate action to give border officials the power to forcibly repatriate Central American illegal immigrants, including children who arrived alone, back to their countries.