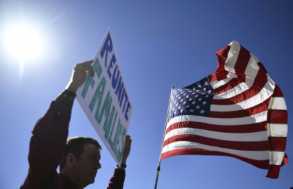 Washington (AFP) – The director of US border control has said parents crossing in from Mexico illegally will for now no longer be referred for prosecution, US media reported, effectively suspending a key plank of the “zero tolerance” policy.

US Customs and Border Protection Commissioner Kevin McAleenan, who made the announcement Monday to reporters in Texas, and other officials insisted however that the policy remains in effect.

The policy of separating children from their parents — including toddlers and even babies — drew scorn in America and around the world and forced Trump to make a rare retreat.

McAleenan said the reason for suspending prosecution of parents was in fact Trump’s order and that his agency does not have detention space for all the families coming across the border.

“We’re not prosecuting those parents,” McAleenan said, according to Politico.

According to the New York Times, the official said his agency and the Justice Department should agree on a policy “where adults who bring their kids across the border — who violate our laws and risk their lives at the border — can be prosecuted without an extended separation from their children.”

Border control agents will continue to refer for prosecution single adults who cross over illegally. They will also separate children from adults if the child is in danger or if the adult has a criminal record, McAleenan said.

The border control chief also said he is working on a plan to resume prosecution of parents who cross over with kids.

She said the bottom line was the government lacks the means to detain all the families crossing the border.

“We’re not changing the policy,” Sanders said. “We’re simply out of resources.”