‘We are always willing to explore our options…’ 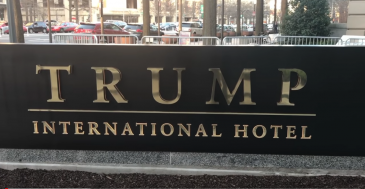 (AFP) The Trump Organization is considering selling the lease rights to the luxury hotel it operates in Washington, The Wall Street Journal reported on Friday.

Eric Trump, executive vice president of the Trump Organization and one of President Donald Trump’s sons, told the newspaper the company has hired real-estate firm JLL to market the Trump International Hotel.

The newspaper said one of the reasons the company is considering the sale is criticism that the Trump Organization is violating ethics laws by profiting from the hotel.

“People are objecting to us making so much money on the hotel, and therefore we may be willing to sell,” Eric Trump told the Journal.

“Since we opened our doors, we have received tremendous interest in this hotel and as real-estate developers, we are always willing to explore our options,” he added.

The downtown Washington building housing the Trump International Hotel is government property and is leased to the Trump Organization for up to 100 years.

The Journal, quoting people familiar with the matter, said the company is hoping to obtain more than $500 million for the lease rights.

The Trump Organization has operated the hotel since 2016.

Shrugging off accusations that he is profiting from his presidency, Trump has visited the hotel and several of his other properties on numerous occasions since entering the White House.

Earlier this month, the White House announced that next year’s G7 summit would be held at one of the president’s Florida golf clubs but Trump quickly reversed the decision amid widespread criticism.