While crediting Kelly with “doing an excellent job in many ways,” Trump said that “at some point he’s going to want to move on. John will move on.” 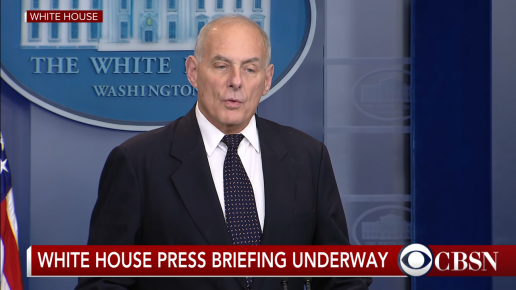 (AFP) US President Donald Trump is thinking of replacing up to five senior advisers but insists that his administration is “running like a well-oiled machine,” according to an interview aired Sunday.

“I have three or four or five positions that I’m thinking about,” he told “Fox News Sunday” interviewer Chris Wallace.

“Maybe it’s going to end up being two. But I need flexibility.”

Denying recurrent reports of a White House in turmoil — with pressure growing from the investigation into Russian meddling in the 2016 election — he said that some staff turnover was normal.

He declined, however, to repeat an earlier assurance that John Kelly would remain his chief of staff through 2020.

While crediting Kelly with “doing an excellent job in many ways,” Trump said that “at some point he’s going to want to move on. John will move on.”

He also said that “there’s a chance” that Kirstjen Nielsen might be replaced as homeland security secretary.

Trump also defended the decision Wednesday by the office of his wife Melania to issue a highly unusual statement suggesting that deputy national security adviser Mira Ricardel be replaced.

Ricardel left that post the following day for assignment to an unspecified new position.

The First Lady was reportedly peeved with Ricardel’s involvement in her recent Africa trip.

“I thought it was fine,” the president said of his wife’s intervention, adding of Ricardel, “She was with me for a long time, although I don’t know her.”

The Fox interview was recorded on Friday.