‘They realize that confrontation is not going to win the day. They’re going to have to make nice…’

In many ways, Trump has no choice, as the president and his allies scramble to notch a policy victory before the 2020 election.

Only Pelosi, D-Calif., can decide whether the pact to replace the North American Free Trade Agreement comes up for a vote in the Democratic-controlled House. Advocates hope that will happen before the House goes on recess in August and the 2020 campaign kicks into high gear, all but destroying chances to pass the deal in Congress for the rest of Trump’s term.

So far, Trump and Pelosi have not met to discuss the pact’s future. But Trump’s top negotiators have been unusually conciliatory — taking pains to avoid confrontation, praising Pelosi for her openness, considering her suggestions and thanking her for letting them make direct pitches to moderate and freshman Democratic lawmakers whose support is critical.

“Speaker Pelosi has been very cooperative with (U.S. Trade Representative) Bob Lighthizer, very helpful in allowing him access to her conference,” Larry Kudlow, Trump’s top economic adviser, told reporters. “He spoke to the whole Democratic conference, which is very cool.”

Trump, always the biggest unknown and at times the greatest threat to his own administration’s strategy, has refrained from attacking Pelosi personally thus far, making her a rare exception for a powerful opponent. It’s uncertain whether he can continue that restraint. On other issues that Democrats have blocked, such as the border wall and an Obamacare repeal, Trump has not held back his attacks.

Some in the White House are arguing to put more pressure on Pelosi from the outside, believing she will not hand Trump a victory on a top political issue unless forced to by moderate Democrats representing closely divided House districts.

Others argue that Pelosi could be enticed by offering her a legislative accomplishment, such as lifting caps on certain domestic spending programs, which the White House opposes.

Pelosi on Thursday said she wouldn’t use the trade deal as a bargaining chip.

“It will stand on its own,” she said.

The outcome holds major consequences for the U.S. economy. Trump has threatened to pull out of NAFTA if Congress fails to approve the updated version, dubbed the U.S.-Mexico-Canada Agreement, or USMCA. Trump could be bluffing, as he has on other legislative threats, and there are legal questions about whether he has the power to do so. But complete withdrawal could have devastating consequences for a variety of businesses — led by agriculture and manufacturing — that it is feared could plunge the rest of the economy into free fall.

Trade among the three countries surpassed $1.2 trillion last year, thanks to zero tariffs for almost all goods crossing one another’s borders and deeply integrated supply chains formed since NAFTA took effect in 1994. 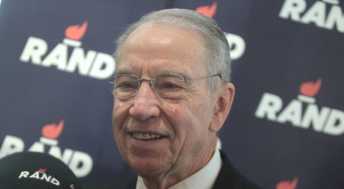 “I know the Democrats have trouble with labor, environment and enforcement. Whatever we can do short of reopening negotiations, I want to help,” said Sen. Charles E. Grassley, R-Iowa, chairman of the Senate Finance Committee.

But with every move, he said, he sees one person as the key: “You’ve got to think, ‘What’s Pelosi think of all of this?’ ”

Pelosi has been intentionally vague, hoping to maintain leverage and deferring to her rank and file, many of whom want a deal but are demanding policy changes. There are significant risks for her and her members, particularly the freshmen: They don’t want to come off as obstructionists or get blamed for torpedoing a trade deal.

Pelosi on Tuesday said at a Politico panel that she was “inclined to see if we can’t improve on” NAFTA but warned that Democrats’ concerns about the enforcement of labor rules for all three countries is key.

“Enforcement has to be in the treaty, not in the implementing legislation,” Pelosi said, seemingly calling for the deal to be renegotiated, but leaving some wiggle room.

Reopening negotiations on the pact entirely could destroy it, since it took more than a year to complete, and Canada and Mexico would need to approve the same document in their respective legislative bodies. But modifications to the text or side agreements can be hatched to address deficiencies Pelosi and other Democrats have voiced, especially over enforcement of labor standards. Mexico is also under pressure to enact changes to its own labor laws that could alleviate concerns of unions and other groups that blame NAFTA for shifting many American jobs to low-wage Mexico.

“With enforceable labor, we will help pass it,” said Richard Trumka, president of the AFL-CIO, although he viewed it as unlikely that it would happen by the end of summer.

Opposition from labor groups — who have so far remained neutral but like key parts of the deal — would likely kill widespread Democratic support in the House.

So far, Pelosi has signaled to the White House that they can make their case directly to her members. She allowed Lighthizer to meet with rank-and-file members late last month, and he huddled with freshman Democrats this week. But she’ll also allow in labor and environmental advocates, along with opponents of the pharmaceutical industry, all of whom have voiced suspicions about the deal, according to an aide.

Rep. Richard E. Neal, a Massachusetts Democrat who leads the Ways and Means Committee, said Lighthizer has shown flexibility, and he suggested the deal would be approved.

“He struck me as being very, very open to discussion,” Neal said. “I think if you can do some tweaking here to get (the deal) done where you can get broad Democratic support.”

Eric Miller, a trade consultant and global fellow at the think tank Wilson Center, attributes the administration’s conciliatory tone to one lesson learned from the recent partial government shutdown, in which Trump eventually backed down after a standoff with Pelosi and the Democratic leadership.

“The experience of the 35-day shutdown is: Pelosi won’t get rolled,” Miller said. “They realize that confrontation is not going to win the day. They’re going to have to make nice. The administration is very much aware that if it becomes a partisan issue, passage is fairly remote.”

Democrats representing moderate districts — particularly those with manufacturing or agricultural bases — may decide they need to work with Trump, or at least avoid appearing obstructionist. While many newer Democrats won because of Trump’s low popularity, some also promised to rise above partisanship. With the House controlled by Democrats and the Senate controlled by Republicans, they are unlikely to have many legislative accomplishments to run on besides possibly the trade deal.

“Democrats are going to have to show that they can do more than just oversight,” said David Tamasi, a lobbyist and Trump ally.

What’s more, analysts say many of the Democratic newcomers appear to be more accepting of increasing trade than senior members of the party, who had become more skeptical of trade agreements after the initial NAFTA deal.

Some outside groups supporting the trade pact are hoping to appeal to the party’s freshmen and moderates. Trade Works for America, a political organization made up of industries that support the trade agreement, estimates it will spend $15 million to $20 million on ads and advocacy efforts targeting 50 lawmakers, most of them Democrats.

“There are a lot of freshman Democrats in competitive or Republican-leaning districts who I think are going to be supportive of the policy, but are going to want to know that back home this is good politics,” said Phil Cox, the Trade Works for America national co-chair.

Some in the White House want to put an even sharper edge on that effort by sending administration officials to those districts, according to one official who declined to be identified.

Barry Bennett, a lobbyist and former political adviser to Trump, said Republicans were trying to figure out whether Pelosi has good-faith demands that can be met, or will never be satisfied as long as Trump is president. “One you can overcome,” he said. “The other one, you just have to politically make her pay for that.”

So far, officials have been wary of doing anything that would annoy Pelosi. But they can’t control the president. And if Trump becomes personally involved in pressuring or attacking Democrats, it could backfire, given his low standing among many Democrats and swing voters.

“The more the president gets involved,” said Daniel Ujczo, a trade expert at the law firm Dickinson Wright, “that’s worse for USMCA.”