‘We should get on with our lives…’ 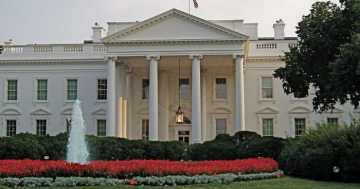 (Eli Stokols, Los Angeles Times) WASHINGTON — President Donald Trump on Monday seemed to back further away from his threat to declare a national emergency to fund a southern border wall and perhaps resolve the 24-day-old partial government shutdown, demanding instead that Democrats give him the $5.7 billion he wants.

“I’m not looking to call a national emergency,” Trump told reporters on the White House South Lawn. “This is so simple, you shouldn’t have to.”

The president again insisted that he has “the absolute right” to use an emergency declaration to bypass Congress and redirect money in military accounts toward a wall, as conservative media pundits and some far-right Republicans have urged. Yet many Republicans in Congress, while eager to end what is now the longest shutdown in history — polls show significantly more Americans blame them and Trump than Democrats — expressed opposition to an emergency declaration as an unwarranted exercise of presidential power.

Democrats, Trump said, “should agree on border security” and end the stalemate. “We should get on with our lives.”

In reality, the Democrats have stood firm behind their leaders, House Speaker Nancy Pelosi of San Francisco and Senate Minority Leader Charles E. Schumer of New York. Republicans, however, are showing splits.

Some politically vulnerable Senate Republicans have stated publicly that they would prefer to end the shutdown and fight separately for additional border security funding, including a wall. But hard-line conservatives tell the president that would be tantamount to accepting defeat and would disappoint his supporters.

Trump said he rejected a proposal by Sen. Lindsey Graham, R-S.C., for lawmakers to approve a short-term funding bill that would temporarily reopen the government and allow lawmakers a few weeks to negotiate without the disruption that has left about 800,000 federal employees unpaid and has shut down or reduced a variety of essential services.

Reiterating the arguments he made last week, including in a prime-time Oval Office speech to the nation and a visit to the U.S.-Mexico border, Trump repeated his claims of a crisis there that demands a sweeping federal response — claims that, thus far, have little moved public opinion or convinced Democrats to negotiate.

“We have a very big crisis on the border, a humanitarian crisis,” Trump said.