“They were doing whatever it was during the Obama administration”, Trump said of the alleged Russian hackers… 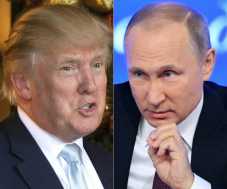 AFP/File / DON EMMERT, Natalia KOLESNIKOVA
The two presidents have shared personal bonhomie in the past, but beyond the alleged hacking of the US election, their countries are deeply divided on a host of other issues including Syria and Ukraine

(Issam AHMED, AFP) Washington – Donald Trump says he may ask Vladimir Putin during their Monday summit meeting to extradite to the US 12 Russian intelligence officers accused of attempting to interfere with the 2016 presidential election.

Speaking in an interview with CBS Evening News aired Sunday, the US president also sought to temper expectations about how much could be achieved.

Asked whether he would press his Russian counterpart to send to the US members of the Russian military intelligence agency accused of hacking Hillary Clinton’s failed presidential campaign, he said: “Well, I might.

Speaking before the summit in Helsinki, Trump added that his Republican Party had also been the target of Russian hacking efforts but had superior cyber security measures in place.

“I think the DNC (Democratic National Committee) should be ashamed of themselves for allowing themselves to be hacked,” he said. “They had bad defenses and they were able to be hacked. But I heard they were trying to hack the Republicans too. But — and this may be wrong — but they had much stronger defenses.”

CNN reported in January last year that then-FBI Director James Comey told a Senate panel that “old emails” of the Republican National Committee had been the target of hacking — but the material was not publicly released — and there was no sign the current RNC or the Trump campaign had been successfully hacked.

Mueller is investigating possible collusion between Trump’s campaign and Russia.

“If the Russians wanted to exfiltrate data from the RNC and use it against Donald Trump, they would have done so,” Democratic Congressman Adam Schiff said on CNN’s “State of the Union” Sunday.

While Trump blamed the administration of former president Barack Obama, not Russia, after the indictments, US ambassador to Moscow Jon Huntsman said Sunday that “Russia is guilty of involvement and mischief in our election this last go-around.”

He said the summit is important as the start of a dialogue, not only about election meddling but a range of issues.

Huntsman said on “Fox News Sunday” that Trump “is genuinely looking forward to sitting across the table and trying to reduce the tension in a relationship where our collective blood pressure is off-the-charts high.”

The two presidents have shared personal bonhomie in the past, but beyond the alleged hacking of the US election, their countries are deeply divided on a host of other issues including Syria and Ukraine.

Before coming to Europe, Trump predicted his meeting with Putin could be the “easiest” stage of a tour that included stops in Brussels and Britain.

But he told CBS that he was going into it with “low expectations.”

Trump also defended his decision to hold the meeting after opposition Democrats, and Republican Senator John McCain, said the summit should be canceled in the wake of the indictments.

“I believe it’s really good. So having meetings with Russia, China, North Korea, I believe in it. Nothing bad is going to come out of it, and maybe some good will come out,” the president said in broadcast excerpts. The rest of the interview will air on Monday.

Trump told CBS that “Russia is a foe in certain respects,” and also named the European Union and China as “foes” economically, over trade practices for which Washington has imposed sanctions, sparking a trade war.

US National Security Adviser John Bolton said that, after the indictments, Trump “can put this on the table and say, this is a serious matter that we need to talk about.”

He told ABC’s “This Week” that “it’s very important that the president has a direct one-on-one conversation” with Putin, and European leaders have expressed support for it.