‘Our border has never been more secure…’ 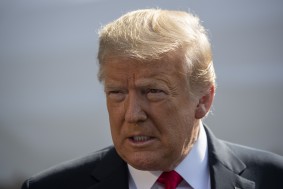 Trump credited the wall with stopping not just illegal immigration but also the coronavirus, saying “It stopped COVID, it stopped everything.”

“Our border has never been more secure,” Trump declared as he met with Republican Gov. Doug Ducey and federal Border Patrol officials.

Later Tuesday, he’ll address a group of young Republicans at a Phoenix megachurch, where event organizers have pledged thousands will attend.

The “Students for Trump” event will be held at the Dream City Church and broadcast to groups across the nation. Students for Trump is a special project of Turning Point Action, a grouped chaired by Trump ally Charlie Kirk, which is hosting the president for his address. Organizers said health and safety measures still were being finalized and it was unclear if attendees would be asked to wear masks or keep socially distant.

Trump’s visit to the Phoenix megachurch comes on the same day that Vice President Mike Pence kicks off a faith-centered tour, highlighting the central position that religious conservatives -– particularly white evangelicals, but also right-leaning Catholics -– continue to occupy in the president’s base.

Trump has promised to build 450 miles of border wall by the end of the year, but that seems unlikely. The government has awarded more than $6.1 billion in construction contracts since April 2019 for various projects along the border.