The White House Office of Communications said the event would “highlight the work the Trump administration has been doing to date on behalf of America’s next generation. Millennials make up over a quarter of the U.S. population and are continuing to shape public discourse and policy.”

Trump gave orders to U.S. Trade Representative Robert E. Lighthizer to create a list of Chinese products that should have tariffs due to their illegal use of American technology.

“Look, we’ve lost so many factories. Probably 60,000 factories,” Trump said. “Nobody can believe it. In fact, when I first heard the numbers I said, ‘that can’t be real.’ We lost anywhere from 6 to 7 million jobs over a relatively short period of time.”

He said the trade deficit with China has grown to between $375 billion and $504 billion per year. But he gave some optimism. America now has 153 million jobs — the most in history.

“Our past presidents, frankly, should never have allowed this to happen,” he said.

Trump transitioned to discuss tax cuts and their effect on millennials.

“If you think about it, millennials starting out, you have a tremendous advantage now over what you had,” he said. “You’re going to pay less taxes. You have far more incentive. You’re gonna have a lot more money left in your paycheck to spend, and that’s part of the beauty.”

Millennials particularly benefit from the standard deduction, which Trump’s tax plan increased from $6,000 to $12,000 per person.

The tax bill also made it easier fr millennials who want to start families, as the Child Tax Credit increased from $1,000 to $2,000 per child. 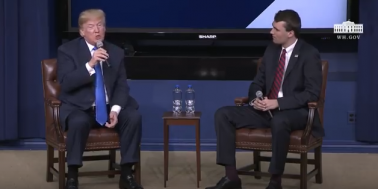 The Q&A segment finally reached the issue of free speech on college campuses, which some millennials conservatives consider the greatest threat to the country.

“One of the other things you’ve done so successfully during your campaign and your presidency is crush political correctness,” Kirk said. “It’s harder than ever to espouse support of your presidency and the ideas that you’re fighting for.”

He asked for advice from the president about how to deal with college administrators who have prevented conservatives from voicing their beliefs.

“I think we have a lot of support,” Trump said. “If they have one campus or two campuses — and we know what they are — it gets all the publicity. We have campuses where you have a vast majority of people…that want free speech.”

He said that radical leftist groups like Antifa receive all the publicity, but they have little support.

“We have tremendous support,” Trump said. “I would say we have majority support. I think it’s highly overblown.”