Mile-long firing of 10,000 fireworks will be ‘the largest in recent memory…’ 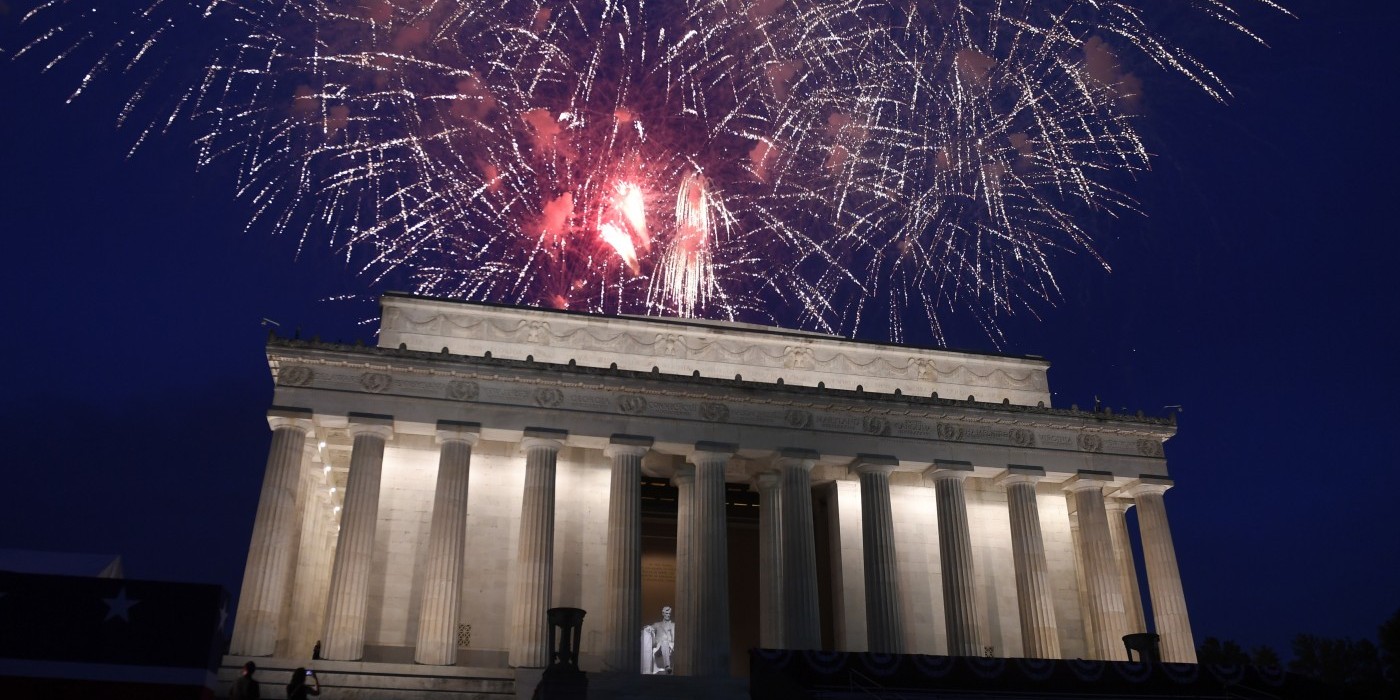 Fireworks go off over the Lincoln Memorial. / PHOTO: Associated Press

(Liberty Headlines) President Donald Trump’s July Fourth celebration on the National Mall will feature one of the largest fireworks displays ever and as many as 300,000 face masks will be given away to those who want them.

But despite demands from D.C.’s far-left mayor, no one apparently will be required to wear them.

Trump made no mention of the masks or of the pandemic overall in a tweet Wednesday on his Independence Day pIans. He thanked corporate donors for supporting “what will, without question, be a special evening.”

“President Trump’s 2020 Salute to America will be a patriotic tribute to our men and women in uniform,” Bernhardt said in a statement.

A mile-long firing of 10,000 fireworks will be “the largest in recent memory,” he said.

July Fourth comes as Americans are dealing with surging cases of COVID-19 and confusion over best practices in public, especially on masks.

With the president pushing to go ahead with large campaign rallies and other public gatherings like the upcoming holiday event, his Democrat adversaries—who very recently shrugged off virus concerns during race riots and massive protests—have once again doubled back to their earlier fearmongering over a “second wave.”

Among those who disingenuously claim to be deeply concerned is Washington Mayor Muriel Bowser.

No stranger to partisan power flexes, Bowser—who recently had the words “Black Lives Matter” painted on a street near the White House—doesn’t have the right to shut down the holiday spectacle because it’s on federal land.

Nonetheless, she hypocritically complained about the dangers of such a large crowd.

Bowser said she had briefly read through the Interior Department’s statement on the July Fourth plans and believed they were not consistent with established health guidelines.

“We know this is a special event for the Department of Interior. We’ve communicated to them that we do not think this is in keeping with the best CDC and Department of Health guidance. But this event will take place entirely on federal property,” Bowser said.

Washington is currently in phase 2 of its reopening plans, and Bowser asked district residents to avoid large crowds and celebrate July Fourth at or near their homes.

“We are giving D.C. residents the same message about any of their outings for the holiday weekend. Ask yourself, do you need to be there,” she said. “Ask yourself, can you anticipate or know who all is going to be around you? If you go downtown, do you know if you’ll be able to social distance?”

Interior officials planned to have 300,000 face coverings on hand to give away at the National Mall. Bernhardt said visitors would be encouraged to wear masks and keep a six-foot distance from one another. There was no indication that would be mandatory, despite the recommendations of health officials.

Trump and first lady Melania Trump plan to host events from the White House south lawn and from the Ellipse on Saturday, the day after Trump attends a separate fireworks display and public gathering at Mount Rushmore.

This year’s event will roll out without military vehicles. After Trump had expressed admiration for France’s military-themed parades, last year’s Independence Day events, featuring an address by Trump near the Lincoln Memorial and military flyover, included stationary displays of Bradley fighting vehicles.

An Interior Department inspector general’s report last week estimated the partial price tag of last year’s Salute to America at $13 million, twice as much as previous years’, in part because of the cost of including the Bradleys. Like last year, donations are helping support part of the cost of the July Fourth events, Bernhardt said.