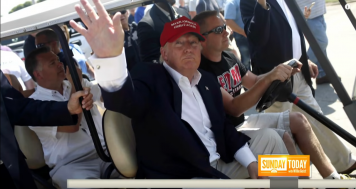 Trump made a shorter-than-normal trip to his Trump International Golf Club in unincorporated West Palm Beach on Saturday, returning to his Mar-a-Lago estate shortly before noon with plans to watch the funeral service for former first lady Barbara Bush. There were no other official events on the president’s schedule.

First lady Melania Trump, who has been with the president at Mar-a-Lago the past week, traveled to Houston for the funeral. Also in attendance were four former presidents: Barack Obama, Bill Clinton and Barbara Bush’s husband and son — George H.W. Bush and George W. Bush. Former first ladies Michelle Obama, Laura Bush and Hillary Clinton were also at the service.

Trump’s decision not to attend a former first lady’s funeral is not unprecedented for an incumbent president. In 2016, Obama did not attend former first lady Nancy Reagan’s funeral, citing previously announced plans to speak at the South by Southwest Interactive tech festival in Austin, Texas.

Trump late Friday hailed an announcement by North Korean leader Kim Jong Un that he would suspend nuclear tests and intercontinental ballistic missile launches ahead of an upcoming summit with South Korea and planned denuclearization talks with Trump. Kim’s announcement came after Trump and Japanese Prime Minister Shinzo Abe met at Mar-a-Lago and reaffirmed their “maximum pressure” stance against the Kim regime.

“This is very good news for North Korea and the World – big progress! Look forward to our Summit,” Trump tweeted shortly after Kim’s announcement. Later Friday, Trump mentioned North Korea again and tweeted “Progress being made for all!”

But Friday night’s optimism yielded to Saturday morning presidential anger at a New York Times article that says Trump has treated Cohen poorly for years and Cohen now “could end up cooperating with federal officials who are investigating him for activity that could relate, at least in part, to work he did for Mr. Trump.”

Moments after making the 4½-mile trip from Mar-a-Lago to his golf club on Summit Boulevard, the president — in a series of tweets — accused Times reporters of “going out of their way to destroy Michael Cohen and his relationship with me in the hope that he will ‘flip.’”

Trump called Cohen “a fine person with a wonderful family. Michael is a businessman for his own account/lawyer who I have always liked & respected. Most people will flip if the Government lets them out of trouble, even if…it means lying or making up stories. Sorry, I don’t see Michael doing that despite the horrible Witch Hunt and the dishonest media!”

Cohen arranged a $130,000 payment to Daniels a few weeks before the 2016 election as part of a non-disclosure agreement after Daniels claimed she had an affair with Trump in 2006. Trump has denied Daniels’ claims and told reporters this month he did not know about the $130,000 payment.

The FBI raided Cohen’s office, home and hotel room on April 9 seeking evidence of fraud as they conduct a criminal investigation. The Associated Press, citing people familiar with the raid, said the seized materials include records related to payments Cohen made to Daniels and to former Playboy model Karen McDougal, who also claims to have had an affair with Trump.

“Attorney-client privilege is dead!” Trump tweeted after the Cohen raid.

Trump, who is making his 17th visit to Mar-a-Lago since becoming president, is scheduled to return to Washington on Sunday afternoon.