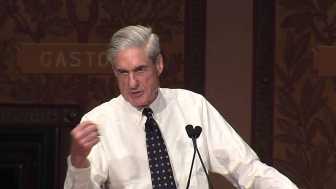 (Daily Mail) President Donald Trump is blasting reports he ordered an aide to fire special counsel Robert Mueller as head of the Russia probe only to back off when his White House lawyer threatened to quit.

Speaking to reporters in his first substantive comments of the day in Davos, where he is preparing to give an ‘America First’ speech to dignitaries and business honchos, Trump ripped a New York Times report as ‘fake news.’

He did not otherwise get into the substance of the report: that he asked White House counsel Don McGahn to fire Mueller last summer amid a series of reports that he was running an aggressive probe of his campaign’s Russia contacts and possible obstruction of justice.

Trump told McGahn – a former Federal Elections Commission member who served as Trump’s campaign lawyer and advisor throughout the campaign – he wanted the overseer of the Russia investigation out, just a month after he was appointed.

But McGahn said he would rather resign then carry out his orders, four people with knowledge of matter told the New York Times.

**MORE COVERAGE OF THE MUELLER INVESTIGATION at LibertyHeadlines.com**

Trump also took a shot at 2016 rival Hillary Clinton – though he did so in more diplomatic terms than usual in Switzerland.

‘I will say this with great conviction, that had the opposing party won, in my opinion, because they would have added additional regulation, I believe the markets would’ve been down anywhere from 25 to 50 percent,’ Trump said after a meeting with Swiss President Alain Berset…Original Source…