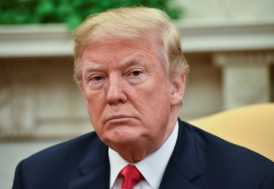 (Delphine Touitou, AFP) Washington – By inflicting tariffs on the steel and aluminum of his allies, and then on tens of billions of dollars in goods from China, US President Donald Trump has quickly moved to fulfill the tough campaign pledges he made on trade.

During his first year in office, Trump and his top economic aides made repeated threats and warned that preliminary investigations were launched into whether certain imports were being unjustly subsidized. But no concrete steps were taken.

That all changed in March, when the “America First” president went on the offensive.

“What happened for a period of time is the president was constrained by different members” of his administration, said Edward Alden, a specialist on US economic competitiveness at the Council on Foreign Relations.

“But the president has become increasingly confident in his own judgment on these issues… He is willing to do radical things he promised during his campaign and for many years before that.”

The move, which Trump justified as payback for the theft of American intellectual property and technology, reignited a trade spat between the world’s two largest economies, spooking markets and worrying business leaders.

It came on top of the tariffs on Chinese steel and aluminum that went into effect in late March — measures that prompted Beijing to slap punitive duties on 128 US goods, including pork, wine and certain pipes.

Since June 1, steel and aluminum imports from the European Union, Canada and Mexico have been hit with tariffs of 25 percent and 10 percent, respectively.

Trump has seemingly opted to go with his gut, sometimes over the protestations of his closest aides.

On the metal tariffs, he ignored the warnings of then chief economic advisor Gary Cohn, who was against the move. Cohn has since left the administration.

And though the US and China reached a “consensus” at high-level trade talks led by US Treasury Secretary Steven Mnuchin in May, Trump did not hesitate to trample on it.

China had offered to ramp up purchases of American goods by only $70 billion to help cut the yawning trade imbalance with the United States, whereas Trump had demanded a $200 billion deficit cut.

When he didn’t get it, he made good on his threat to unleash a raft of tariffs.

“It is an extremely dangerous and provocative strategy,” says Alden.

Trump and his most hardline advisors — led by Peter Navarro, who is openly hostile to China — are convinced that the US will win a trade war.

Their argument: Washington’s trade partners, especially Beijing, have much more to lose than the United States, given their dependence on selling to the US market.

On Friday, the unorthodox Republican president reiterated that he is unafraid of a trade war — for him, the war is already lost when a country posts a massive trade deficit, so it cannot get worse.

AFP / Cecilia SANCHEZ Timeline of trade tensions between the US and its partners, from metal tariffs to duties on Chinese imports

In 2017, the US exported $130.4 billion worth of goods to China, the world’s second biggest economy. It imported $505.6 billion worth of Chinese goods, according to Commerce Department statistics.

Eswar Prasad, a China specialist and professor of trade policy at Cornell University, said that while the overall impact of an open trade war on the two economies “is likely to be modest, there could be significant damage inflicted on specific export-oriented firms and industries caught up in the battle.”

He added that many sectors of the US economy, from agriculture to aircraft manufacturing, “could suffer significant collateral damage” from a trade war.

This week, the director of the International Monetary Fund, Christine Lagarde, issued a warning about protectionism.

If there is tit-for-tat retaliation from US trading partners, which they have threatened, there will be “losers on both sides,” Lagarde told reporters.

The IMF has said for months that the prospect of a sweeping trade war could derail global growth, which struggled after the 2008 financial crisis but is now boosted by the worldwide exchange of goods and services.