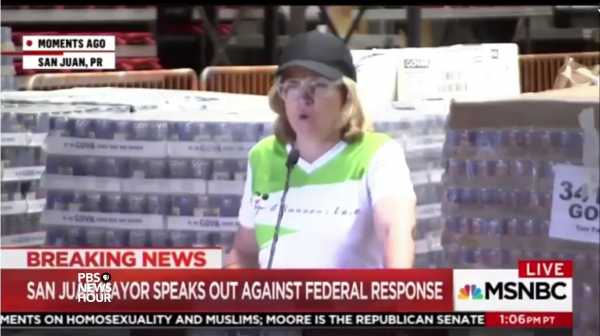 (Noah Bierman and Paloma Esquivel, Los Angeles Times) President Donald Trump on Thursday accused Democrats of inflating Puerto Rico’s death toll from Hurricanes Maria and Irma, insisting the total is much smaller than various studies have found—a contention that provoked widespread outrage on the Left even as the East Coast braced for a massive new storm.

The president’s rejection of the U.S. island’s official tally that nearly 3,000 people died after last year’s devastating hurricanes came in back-to-back morning tweets came while millions of Americans were anxiously watching the path of Hurricane Florence as it headed toward the Carolinas.

Trump for days has been focusing on federal preparations for that storm, recognizing that his administration’s response will be a key test of competency ahead of the November elections.

The president has been dodging media attacks all week in an effort to pin the natural disaster on him. Trump called the federal government’s response last fall in Puerto Rico an “incredible unsung success” while criticizing the ineptitude of politicians like San Juan Mayor Carmen Yulin Cruz for attempting to score political points from the crisis and failing to do their part in distributing supplies and using relief funding to rebuild the stricken island.

In Puerto Rico, many residents went without power for nearly a year after Maria, the second and most destructive of two major storms, made landfall nearly a year ago, on Sept. 20. Reconstruction has lagged, leaving thousands of people living under blue tarps.

The government’s official death toll rose from about 17 when Trump visited in October, to 64 and recently, after extensive research and public outcry, to 2,975—the tally fixed by researchers commissioned by the island’s government.

Yet Trump tweeted, “3000 people did not die in the two hurricanes that hit Puerto Rico. When I left the Island, AFTER the storm had hit, they had anywhere from 6 to 18 deaths. As time went by it did not go up by much … ”

Trump accused Democrats of reporting larger numbers “in order to make me look as bad as possible when I was successfully raising Billions of Dollars to help rebuild Puerto Rico.”

“If a person died for any reason, like old age, just add them onto the list,” he added. “Bad politics. I love Puerto Rico!”

The Puerto Rican government says its tally of 2,975 is based on a monthslong study by the George Washington University Milken Institute School of Public Health, which compared death rates in prior years with those in the six months after the storm hit.

It’s common for death rates to climb even months after a natural disaster, given both the lingering damage and the fact that initial assessments are compiled in chaotic conditions. In Puerto Rico, many sick and injured residents went without adequate care, and without power, food, medicines and clean water.

Cruz, a Democrat has been a sharp critic of the federal government’s response. During Trump’s October 2017 visit to the island, when he playfully tossed paper towels into a crowd, she complained that the gesture was insensitive.

“From the start, he looked at it as a way to position himself on the political spectrum,” Cruz said in an interview. “But what the world saw was a paper-towel-throwing bully who had no connection with reality and whose neglect allowed his government to turn their backs on the Puerto Rican people. And people died. And he still does not get it.”

The island’s governor, Ricardo Rossello, has been mostly supportive of the president, but he also denounced Trump’s comments in a statement, saying that “the victims and the people of Puerto Rico do not deserve to have their pain questioned.”

“This is not the time to deny what happened,” he added. “It is the time to assure it never happens again.”

One White House official reached Thursday morning claimed not to have seen the latest tweets.

“There’s a degree of fatalism about it at this point,” said Michael Steel, a former spokesman for Republican congressional leaders, who is in frequent contact with White House advisers. “He’s going to do what he’s going to do.”

Retiring House Speaker Paul D. Ryan of Wisconsin, who often shows exasperation when reporters ask him about Trump’s comments, sounded Thursday as if he were trying to coax the president to accept reality by assuring him he would not take blame.

“Casualties don’t make a person look bad … so I have no reason to dispute the numbers,” Ryan told reporters at the Capitol. “I was in Puerto Rico after the hurricane. It was devastated. This was a horrible storm.”