‘As President of the United States, I will always put America First…’ 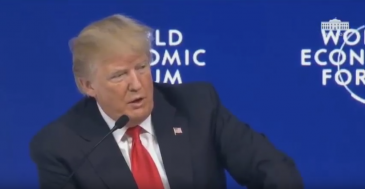 But after an invest-in-America pitch that had lines that could have been cribbed from a governor’s trade mission, Trump drew audible gasps from the crowd when he reached for his ‘fake news’ broadside against the press.

Trump vented in a brief question-and-answer session about ‘how fake the press can be’ then observed ‘the cameras start going off in the back.’

The line lead to gasps, ‘oohs,’ and even some boos from the crowd, who otherwise listened quietly to his remarks.

In his speech, Trump told business leaders: ‘I believe in America. As President of the United States, I will always put America First. Just like the leaders of other countries should put their countries first. But America First does not mean America alone,’ Trump said, in an excerpt released by the White House.

**MORE COVERAGE OF THE US ECONOMY at LibertyHeadlines.com**

Trump spoke to world leaders on the second day of a trip to the global confab.

Before he addressed the conference in what was billed as a ‘keynote’ speech to an event he dominated by showing up, a large band of horns and winds took the stage.

‘I am aware that your strong leadership is open to misconceptions and biased interpretations,’ said World Economic Founder Klaus Schwab – a remark that drew some hisses in the crowd, who threw praise in Trump’s direction several times Friday…Original Source…