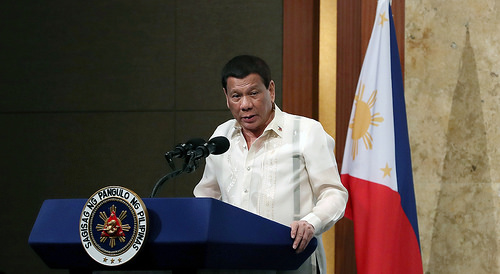 (Quin Hillyer, Liberty Headlines) For whom do the Balangiga Bells toll?

In a rather unexpected example of the adage that “politics makes strange bedfellows,” the Trump administration is siding with the thuggish, anti-American president of the Philippines against the repeated, strongly expressed wishes of the conservative, Trump-friendly congressional delegation of Wyoming.

Last weekend, Secretary of Defense James Mattis announced that the United States will return the somewhat controversial Bells of Balangiga, which serve as a war memorial in Cheyenne for Wyoming (and other) veterans of the American war in the Philippines at the turn of the 20th Century.

The church bells were taken home as a trophy of sorts after U.S. forces retaliated against machete-wielding Filipino forces, which had massacred 48 Americans in a surprise assault. (The bells had been rung as the assault commenced.)

Duterte is the latest, and perhaps loudest, of Filipino leaders who have demanded that the bells be returned.

“Those bells are reminders of the gallantry and heroism of our forebearers, who resisted the American colonizers and sacrificed their lives in the process,” Duterte said in his State of the Nation address last year.

Duterte is a fiercely anti-American ruler who, according to Human Rights Watch, “has plunged the Philippines into its worst human rights crisis since the dictatorship of Ferdinand Marcos in the 1970s and 1980s,” and who has been denounced by Filipino bishops and leaders of other Christian denominations.

Against Duterte’s demands, all members of Wyoming’s delegation, along with several veterans groups, have vociferously opposed the return of the bells.

“For over 100 years, the Bells of Balangiga have been in Wyoming as a memorial to the American soldiers who lost their lives overseas,” said Sens. Mike Enzi and John Barrasso and Rep. Liz Cheney in a joint statement.

The Wyoming congressional delegation said that the state’s veterans strongly opposed the idea of returning the bells.

“While we have respect for the relationship between the United States and the Government of the Philippines, we believe that moving the Bells establishes a dangerous precedent for future veterans’ memorials,” the statement said.

Responding personally to Liberty Headlines, Rep. Cheney added:  “The bells are memorials to American war dead and should not be sent to the Philippines. This decision is opposed by veterans’ organizations. It is also wrong as a matter of policy, particularly at a time when the decision rewards the leader of the Philippines who has called, among other things, for his military to rape women.”

The Wyoming officials aren’t the only ones objecting to the bells’ return.

Reps. James McGovern, a liberal Massachusetts Democrat, and Randy Hultgren, a conservative Illinois Republican, have said the bells should remain in the United States at least until Duterte takes “clear, measurable efforts to stop extrajudicial killings.”

But other U.S. historians and diplomats believe the bells were wrongly taken.

Stars and Stripes quoted retired Air Force Lt. Col. Nonie Cabana, a Filipino American in San Antonio, saying: “I think the return of the Balangiga Bells to the Philippines heals the animosity and hatred both nations shared during the early days of occupation. It shows America’s inclination to err on the side of human decency and humanity.”

The background of the dispute is complicated. As a spinoff of the Spanish-American War of 1898, U.S. forces in 1899 joined Filipino insurgents to evict Spain from its colonial rule of the Philippines. As part of the diplomatic efforts for the out-manned Spanish to avoid further bloodshed, the United States took colonial possession of the islands while clearly indicating such possession would be temporary.

Island insurrections objected, levying an unsuccessful three-year effort to evict the Americans. Some 200,000 islanders died during the conflict–mostly from famine and disease rather than from American military action.

In 1902, the victorious United States allowed a large degree of self-rule by creating the Philippine Assembly, and in 1916 Congress passed the Philippine Autonomy Act which made a commitment to grant full independence to the island nation.

The transition was continuing–in peace and relative prosperity, with most Filipinos being loyal American subjects–until interrupted by Japanese aggression in World War II; Full independence was granted, as promised, in 1946, once the war was over.

Traditionally, Philippine governments–democratic or autocratic–have been American allies ever since.

But the bells have long been a point of at least mild contention, with Filipinos insisting they belong back in the church from whence they came, while U.S. veterans groups say they are symbols honoring fallen Americans.

The two bells in Wyoming are displayed at the F.E. Warren Air Force base, so the Department of Defense has custody of them.