Canadian officials have not ruled out the idea of a bilateral trade agreement, though they said they would prefer a renegotiation of NAFTA… 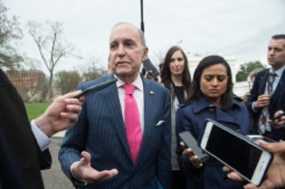 “He prefers bilateral negotiations and he is looking at two much different countries,” Trump economic adviser Larry Kudlow said on Fox News.

A senior Canadian official told AFP that Ottawa is “not ruling out” negotiating a separate deal with Washington, but for now is focusing on NAFTA talks.

But Mexican Economy Minister Ildefonso Guajardo said in a statement that his country wanted to preserve a tri-nation deal.

“We believe that the agreement would lose value were it to stop being what it is today and we want it to continue to be: a trilateral integration of the continent,” he said.

Word of the possible change in tack during the negotiations comes as Washington faces unified opposition from Group of Seven economies, who have vowed to retaliate against Trump’s steel and aluminum tariffs.

Speaking Tuesday to Fox News, Kudlow said he was awaiting a reaction from top Canadian officials to whom he had relayed the idea on Monday.

“I’m waiting to hear what their reaction is going to be frankly. I spoke yesterday to one of their top people, right next to the prime minister. He will probably get back to me sometime today,” Kudlow said, expressing hope the response would come “as soon as possible and move the whole process forward.”

Kudlow noted that the talks to revamp NAFTA had “dragged on” so separate deals “might be able to happen more rapidly.”

Trump “is seriously contemplating a shift in the NAFTA negotiations … (and) he asked me to convey this,” he said, adding that the president “believed bilateral is always better. He hates large treaties.”

Trump on Friday had publicly floated the idea of having individual agreements to replace NAFTA, which he again called “a terrible deal.”

The official in Ottawa told AFP, “Canada is not ruling out signing a separate bilateral trade pact with the United States but right now we’re still focused on negotiating a successful NAFTA deal.”

He noted that Trump had floated this bilateral pact idea last year when Prime Minister Justin Trudeau visited him at the White House.

Trump initially threatened to pull out of the three-nation pact. Talks to revise and modernize the deal have been underway since late 2017 but snagged on US demands to increase American content in duty-free NAFTA autos as well as a five-year sunset clause.

Negotiations are now suspended due to the coming elections in Mexico and the United States.

The Canadian official said there were currently no plans for another round of NAFTA talks but officials “remain in touch by telephone and email.”

Kudlow said Trump “will not withdraw from NAFTA. He will try a different approach.”

“The important thought is he may be moving quickly towards these bilateral discussions instead of as a whole,” Kudlow said, but noted it is not clear how soon that would happen.

The NAFTA talks are just one facet of Trump’s confrontational, multi-front trade policy, which includes imposing steep tariffs on steel and aluminum coming from chief US allies — Canada, Mexico and the European Union — which has prompted sharp retaliation.