‘No one is arguing the former mayor’s guilt or innocence…’

The request was in a letter handed Thursday to Trump by Democratic state Rep. Sherry Gay-Dagnogo at a White House reception.

“The president was receptive,” Gay-Dagnogo told The Detroit News. “He listened intently, said ‘thank you’ and he would look into it.”

Kilpatrick, 49, resigned as Detroit mayor in 2008 following a text-messaging sex scandal involving his chief of staff.

In 2013, a federal judge sentenced the Democrat to 28 years in prison for extortion, bribery, conspiracy and other crimes during his years in office.

Gay-Dagnogo and others were at the White House for a reception celebrating Black History Month. She has said she’s forming a committee to explore a 2021 run for Detroit mayor.

Other state legislators from Detroit and church leaders signed the letter. Prominent Detroit businessman and Compuware co-founder Peter Karmanos also has said he would like Trump to pardon Kilpatrick.

“No one is arguing the former mayor’s guilt or innocence,” Gay-Dagnogo told supporters Thursday in an email. “What we’re seeking (to have) is a conversation about … the disproportionate sentencing that men of color experience at every level of the system.” 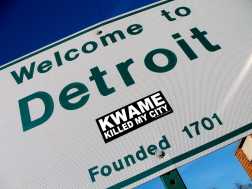 So far, Kilpatrick’s efforts to get out of prison early haven’t worked. He unsuccessfully filed a court petition to have his sentence reduced. And he also has asked for Trump’s help to get out.

“As the elected mayor, he ran a criminal enterprise that corrupted wide swaths of city government in the early 2000s — at a time when city residents desperately needed honest and effective city services,” Schneider said in a statement Thursday.

Both Kilpatrick and Gay-Dagnogo are African American.

Trump’s re-election campaign is pursuing black voters and said it plans to open Black Voices for Trump Community Centers in Detroit and more than a dozen other cities.