Some tried in vain to scour the press bullpen at the Bojangles Coliseum, but the long-suffering—and often equally antagonizing—CNN White House correspondent was not to be found on the cold and rainy afternoon.

Acosta’s Twitter account placed him on the opposite end of the country, receiving a journalism award from San Jose State University.

Proud to be honored with the William Randolph Hearst Award at @SJSU this week. I dedicated the award to all of my fellow journalists at @CNN. As I told the crowd, we will not be terrorized. The events of this week have put steel in our spines. https://t.co/0V55NN3mQu

Pinch-hitting for Acosta was CNN’s chief media correspondent, Brian Stelter, who took the heckles in stride with a sheepish smile as a “CNN Sucks” jeer from the crowd broke out several times.

Tension at the network may have been even more elevated than usual as suspicious packages were delivered to prominent liberal public figures—including CNN, which received one addressed to contributor and former CIA Director John Brennan.

Perhaps as an extra layer of precaution, CNN had its name card turned over at a table reserved for network news correspondents, and Stelter appeared to take advantage of his relative anonymity in an audience that, for the most part, had probably never seen his Sunday morning show “Reliable Sources” on television.

As Stelter himself said, however, despite all the ribbing his network received, many in the audience were eager to shake hands and engage with the media that were present, welcoming the opportunity to have their voices included in the national dialogue.

For Brooke Guidebeck, a North Carolina native now living in Atlanta, who drove four hours to attend the rally, the Trump phenomenon truly is about having an elected leader who speaks for the common man—or woman.

“People are just fired up about having their constitutional rights stay intact,” said Guidebeck. “… We’ve never had a president who was one of us.”

But Guidebeck, a military veteran covered with tattoos, including one of Carolina Panthers quarterback Cam Newton on her left hand, did not seem like a ‘typical’ Republican. 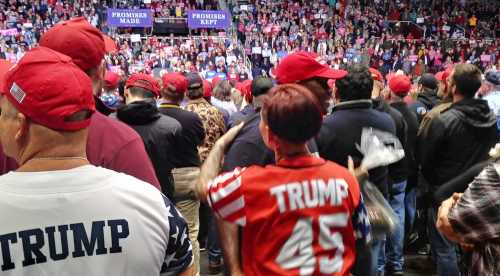 As other nontraditional GOP voters walked by, she eagerly high-fived and embraced them. Spotting one who wore a shirt that said “Proud Gay Trump Supporter,” she chased him down to give him a hug.

It was a far different reception than gay Trump supporters received last year at a Charlotte “Pride” celebration, where they were denied entry over their political beliefs.

Guidebeck said the collegial feeling within the audience was “like going to your next-door neighbor’s house and having dinner.”

Trump, for his part, seemed mostly to resist the siren call of trolling the media, a few days after he took criticism for making light of an incident in which Montana congressional candidate Greg Gianforte body-slammed a reporter.

However, he managed a few underhanded digs while calling on the media to share in the accountability for a more civil discourse.

“We must unify as a nation in peace, love and in harmony,” Trump said. “The media has a major role to play… as far as tone and as far as everything. And we all say this in all sincerity, but the media’s constant unfair coverage, deep hostility…… and negative attacks only serve to drive people apart and to undermine healthy debate.”

Trump cited an unspecified source saying that 94 percent of the press he receives is negative. “Even when I do something wonderful, it’s negative,” he said.

Despite teeing up the audience on several occasions to boo political adversaries like House Minority Leader Nancy Pelosi and Rep. Maxine Waters while discussing Budd’s opponent, Kathy Manning, as an “extreme liberal,” he claimed to be holding back on Waters, a perennial target due to her bombastic rhetoric—and also one of the suspicious package recipients.

His wide-ranging talk did cover a few hot topics, such as the prompt arrest of the pipe-bomb suspect, for which Trump commended law enforcement.

However, it was North Carolina Sen. Thom Tillis in his opening remarks who had the strongest words for alleged right-wing extremist Cesar Sayoc, calling him an “animal” in a statement that echoed Trump’s description of MS-13 gang members, widely excoriated by the Left.

Whether Democrat leaders would respond the same to Sayoc’s ‘de-humanization’ by Tillis remained to be seen.

Trump spent more time in his speech, which ran slightly past an hour, covering policy details, such as the improvements he implemented to the health-care system after falling one vote short in repealing the controversial Obamacare.

“Think of it. One Democrat would have repealed and replaced, but we’re essentially doing the same thing anyway. It’s been decimated by us,” he said, touting among his accomplishments lower premiums and the repeal of the individual mandate penalty for those who do not have insurance.

In a throwback to his days as a builder, Trump fawned over the construction of a brand new embassy in Jerusalem. “We ended up spending $400,000, and we opened it four months after I agreed to do it in the first place.”

Trump also touched on other issues, including the confirmation of Supreme Court Justice Brett Kavanaugh, that he has said would define the midterm election, 11 days from Friday.

“Nobody has ever been treated more unfairly than Brett Kavanaugh,” he said. “What happened to him and his family was an absolute disgrace… We have many women—and as I’m saying how unfairly he’s been treated, they’re all nodding.”

On cue, Guidebeck and others vociferously affirmed the statement.

Guidebeck said her own experiences as a woman had helped inform her perception of the contentious confirmation hearings and the he-said/she-said testimony of Kavanaugh versus sexual-assault accuser Christine Blasey Ford.