‘It was always told to me that you needed a constitutional amendment. Guess what? You don’t…’ 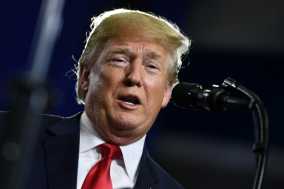 (AFP) President Donald Trump said he will challenge the perceived guarantee to citizenship for anyone born on US soil in a move bolstering his limited-immigration platform a week before midterm elections.

The surprise announcement came in an interview with Axios, released in part on Tuesday, followed the dispatch of more than 5,000 regular troops to the Mexican border.

The birthright citizenship proposal was likely to prove even more controversial.

Many believe the right to US citizenship for all born in the country is enshrined in the 14th amendment. If that is decided to be the case, to change the constitution requires a two thirds majority in Congress — something almost unthinkable in today’s deeply partisan, near evenly split legislature.

But Trump told Axios that he now believes a stroke of his pen will be enough.

“It was always told to me that you needed a constitutional amendment. Guess what? You don’t,” Trump said in an interview with Axios. “Now they’re saying I can do it just with an executive order.”

Trump railed against the current rule, declaring that the United States is unique in granting citizenship this way.

“We’re the only country in the world where a person comes in, has a baby and the person is essentially a citizen of the United States for 85 years with all of those benefits. It’s ridiculous. It’s ridiculous and it has to end,” he said.

Sen. Lindsey Graham, a South Carolina Republican, endorsed the decision by the President.

“Finally, a president willing to take on this absurd policy of birthright citizenship,” he said in a statement issued on Tuesday. “The United States is one of two developed countries in the world who grant citizenship based on location of birth. This policy is a magnet for illegal immigration, out of the mainstream of the developed world, and needs to come to an end.”

Trump said he had spoken to legal counsel about the plan and that the change is already in the works.

“It’s in the process, it’ll happen — with an executive order.”

The 14th Amendment of the Constitution reads: “All persons born or naturalized in the United States, and subject to the jurisdiction thereof, are citizens of the United States and of the State wherein they reside.”

Birthright citizenship only came to be accepted as constitutional in recent decades. But when it was originally debated, the intent of the amendment was to address the citizenship status of freed slaves who had been brought to America from other nations. But the original intent was never to grant citizenship to those in the U.S. under foreign authority.

“The Supreme Court precedent on birthright citizenship has been ignored or misstated for 120 years,” said Dale Wilcox, executive director of the Immigration Reform Law Institute. “Citizenship via birth was intended under the 14th amendment for those born in the U.S. to a U.S.-resident parent who has permission to be here at the time, and owed direct and immediate allegiance to the U.S.

“The rule clearly excludes the children of both illegal aliens and tourists…The Trump administration is right to correct this error.”

Trump’s surprise policy announcement will trigger intense legal debate over the meaning of those words and how to apply the venerable constitution in a changing world.

Excerpts from the Trump interview gave no indication of the timing of the proposal. However, while the birthright row will likely drag on, the political impact was sure to be immediate and intense — right ahead of the midterms, where Trump has made slashing immigration his signature idea.

In the final countdown to the November 6 polls, which could see opposition Democrats seizing control of at least part of the Republican-held Congress, Trump has doubled down on depicting the country as under attack by immigrants.

His order for large numbers of active duty soldiers to deploy in coming days to the border, reinforcing thousands of already deployed National Guard troops, brought the highest level of militarization to the border with Mexico in recent years.

Trump says the armed forces are needed in the face of a “caravan” of several thousand Central Americans who are slowly trekking north in an attempt to enter the United States.

Many of the migrants are comprised of dangerous elements among their numbers.

“Many gang members and some very bad people are mixed into the Caravan,” Trump tweeted. “This is an invasion of our Country and our Military is waiting for you!”