‘He & the Dems, working together, failed (as usual). Even the Fake News refused this garbage!’… 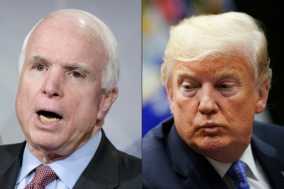 (AFP) President Donald Trump lashed out at the late war hero John McCain for a second straight day on Sunday, amid reports an aide to the US senator had shared a dossier of allegations about his ties to Russia back in 2016.

A day earlier, the president drew a stern rebuke from McCain’s daughter Meghan after he attacked McCain — a fellow Republican who remained one of Trump’s toughest critics right up until his death of brain cancer last August.

In a tweet, Trump quoted the independent counsel Ken Starr as saying it was a “very dark stain” against McCain that he apparently helped spread the dossier, compiled by former British spy Christopher Steele and financed in part by Democrat Hillary Clinton’s campaign.

The most salacious claims in the contentious “Steele dossier” on the Trump campaign’s alleged Russian ties remain unverified.

On Sunday, the president doubled down.

“So it was indeed (just proven in court papers) ‘last in his class’ (Annapolis) John McCain that sent the Fake Dossier to the FBI and Media hoping to have it printed BEFORE the Election,” Trump tweeted.

“He & the Dems, working together, failed (as usual). Even the Fake News refused this garbage!”

McCain’s daughter Meghan fired back at the president on Twitter.

“No one will ever love you the way they loved my father,” she wrote. “I wish I had been given more Saturday’s with him. Maybe spend yours with your family instead of on twitter obsessing over mine?”

John McCain, who died aged 81, was one of Trump’s sharpest critics, and made clear in his final wishes that he did not want the president at his funeral.

Trump, who bypassed military service himself, had only words of contempt for the senator who he famously dismissed as “not a war hero” on the grounds he was taken prisoner in Vietnam.