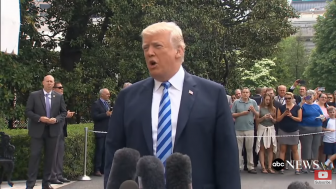 (Paul HANDLEY, AFP) Washington – US President Donald Trump aggressively hardened his defense against the Special Counsel Robert Mueller’s investigation Monday, branding the probe “unconstitutional” and declaring that he has an “absolute right” to pardon himself of any crime.

While both claims lack strong legal foundation, according to most experts, they signalled that the president is doubling down against Mueller’s probe into campaign collusion with Russia and whether Trump sought to obstruct justice.

“As has been stated by numerous legal scholars, I have the absolute right to PARDON myself, but why would I do that when I have done nothing wrong?” he said on Twitter.

“The appointment of the Special Counsel is totally UNCONSTITUTIONAL! Despite that, we play the game because I, unlike the Democrats, have done nothing wrong!” he added in a second tweet.

It was the first time Trump asserted the power to pardon himself, an issue never before tested in courts.

It comes as the White House and Mueller’s team were girding for a possible high-stakes legal showdown over whether Trump will agree to or be forced to be interviewed by investigators, as well as a possible impeachment push that could result from the probe.

While Mueller has indicted 19 people and three companies in his year-old investigation, including several former top campaign aides to Trump, the investigation has so far made no allegations against the president himself.

But questions they have submitted to the White House indicate Mueller is examining Trump’s actions, including his firing of former FBI director James Comey, for possible obstruction of justice.

Trump’s lawyers don’t want him to be interviewed by Mueller, accusing the independent prosecutor, himself a former FBI chief, of trying to “trap” the president in a lie.

A 20-page January letter from Trump’s lawyers to Mueller that leaked to the media over the weekend argued that the White House has answered all of Mueller’s questions and requests, and so he cannot legally force the president to answer questions.

“Your office clearly lacks the requisite need to personally interview the president,” it said.

In a warning, it also claimed he had the power, “if he wished, to terminate the inquiry, or even exercise his power to pardon if he so desired.”

Legal experts said Trump’s broad claims of presidential privilege would not likely hold up in courts.

“Trump is making some incredibly expansive claims of executive power, as though there are no separation of powers limits on his authority. It is hard to imagine judicial backing of these views,” said Mark Rozell, dean of the Schar School of Policy and Government at George Mason University and author of a book on presidential powers.

Former United States attorney and deputy assistant attorney general Harry Litman wrote in the New York Times that the president “believes he is above the law.”

“This understanding of presidential power is radical and absolutist,” he said.

Still, a minority of constitutional lawyers believe the US presidency does have powers to protect itself, including shutting down investigations and rejecting subpoenas.

Trump’s lawyer Rudy Giuliani, who has predicted the investigation will ultimately lead to an impeachment battle, said Sunday that the president “probably” has the power to pardon himself.

“I think the political ramifications of that would be tough,” Giuliani told ABC’s “This Week”. “Pardoning other people is one thing. Pardoning yourself is another.”

Trump did not detail his grounds for claiming that the Mueller investigation is illegal. The independent counsel was established under law by the Department of Justice to investigate links between the Trump campaign and Russian interference in the 2016 election, possible obstruction, and related issues.

Critics have accused the Justice Department of granting Mueller too broad a mandate. But in the only court challenge to that so far, a judge supported Mueller’s mandate.

The Justice Department declined to comment on the claims.