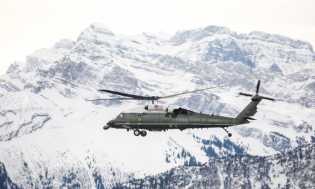 (Daily Mail) President Donald Trump found a softer way to package his ‘America First’ agenda he strode through the conference center on his first day in Davos, calling for prosperity and ‘great peace.’

‘And I think that really is the message,’ Trump told pool reporters who trailed him at each scheduled meeting at the gathering of bigwigs in the snowy Alpine town.

Trump also renewed his public pitch for investors to pour money into the U.S.

‘It’s been going really well. A lot of people are coming back to the United States. We are seeing tremendous investment,’ he said. ‘And today’s been a very exciting day, very great day and great for our country.’

Trump landed on Thursday in Switzerland, where his outsized personality and determination to push an ‘America First’ agenda was upending the annual Davos conference.

To an extent, the annual confab of billionaires and CEOs was centering around Trump even before Air Force One touched down in Zurich, then flew aboard Marine One to Davos in the Swiss Alps.

**MORE COVERAGE OF THE TRUMP ADMINISTRATION at LibertyHeadlines.com**

The approximately 40-minute trip took Trump over a snowy countryside dotted with houses, frosted mountains and a glistening lake.

As Trump got off the helicopter in Davos, he gestured to aides who held him by the arms as he walked across the snowy landing zone to his waiting car.

‘We’re very happy to be here,’ Trump said as he arrived. ‘The United States is doing very well, and will continue to do well and this will be a very exciting two days.’…Original Source…