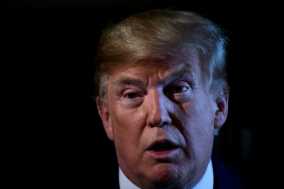 AFP/File / Brendan Smialowski
US President Donald Trump said he had doubled steel and aluminum tariffs on Turkey, adding to pressure on that nation’s troubled economy amid a diplomatic row with Washington

(AFP) – US President Donald Trump said Friday he had doubled steel and aluminum tariffs on Turkey, adding to pressure on that nation’s troubled economy amid a diplomatic row with Washington.

“I have just authorized a doubling of Tariffs on Steel and Aluminum with respect to Turkey as their currency, the Turkish Lira, slides rapidly downward against our very strong Dollar!” Trump said on Twitter.

“Our relations with Turkey are not good at this time!”

Trump’s announcement came as Turkey’s embattled lira hit new record lows against the US dollar and euro, losing nearly nine percent in value as strains with the United States showed no sign of abating and fears grew over the exposure of European banks.

However, the White House later clarified that Trump’s announcement “authorized the preparation of documents” to raise the tariffs. That means it likely will take some time to implement.

Washington imposed the metals tariffs on national security grounds, claiming the glut of steel and aluminum harmed US companies and the economy. It is unclear how that would justify higher tariffs on Turkey but not other countries.

Economist Chad Bown, who specializes in trade issues, said Turkey accounted for just over four percent of US steel imports in 2017, but a very small fraction of the aluminum brought into the country.

Turkey remains at loggerheads with the United States in one of the worst spats between the two NATO allies in years over the detention for the last two years of American pastor Andrew Brunson and a host of other issues.

Meanwhile, markets are deeply concerned over the direction of economic policy under Erdogan, with inflation at nearly 16 percent but the central bank reluctant to raise rates in response.

Erdogan on Friday called on Turks to support their struggling currency.

“We will not lose the economic war,” state-run TRT Haber television quoted Erdogan as saying.

“If you have dollars, euros or gold under your pillow, go to banks to exchange them for Turkish lira. It is a national fight.”

Harsher US tariffs were likely to punish Turkey’s already faltering steel exports to the United States.

In the first three months of 2018, Turkish steel exports to the United States fell nearly 50 percent over the same period in 2017, making it the only top-10 source of US steel imports to see a decrease, according to the US Commerce Department.