Politicians have quarreled about what to call it for decades… 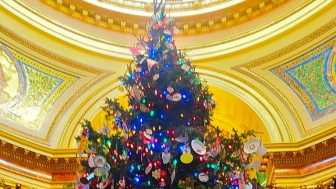 (Liberty Headlines) Wisconsin Gov. Tony Evers lit the state Capitol’s “holiday tree” while praising scientists as a choir sang Christmas carols Friday in an odd juxtaposition of the two sides of the ongoing debate over the tree’s symbolism.

The state Department of Administration places a huge evergreen in the Capitol rotunda every year ahead of Christmas.

Politicians have quarreled about what to call it for decades.

They referred to it as a Christmas tree until 1985, when they started calling it a holiday tree to avoid perceptions that they were endorsing religion.

The Republican-controlled state Assembly passed a resolution in 2007 declaring the tree a Christmas tree but it died in the Democratic-controlled Senate.

Then-Republican Gov. Scott Walker, the son of a Baptist minister, called it a Christmas tree when he took office in 2011.

Evers, a Democrat, called the tree a holiday tree last month and asked schoolchildren to submit science-related ornaments to adorn the tree.

Evers’ administration held a ceremony Friday to turn on the lights hanging on the tree.

State Department of Natural Resources Secretary Preston Cole then took the podium and said science and technology are the foundation of human existence.

Evers, a one-time science teacher, followed with his own speech, saying science is critically important to Wisconsin’s future and the tree is “truly a celebration of science.”

As he invited a trio of fifth-graders to flip the switch, Evers declared that everyone was kicking off “the holiday season.”

The choir closed with “Carol of the Bells” — the lyrics of which wish listeners a merry Christmas.