(Washington Free Beacon) Secretary of State Rex Tillerson made it clear on Wednesday that the United States will not support the continued rule of Syrian President Bashar al-Assad. 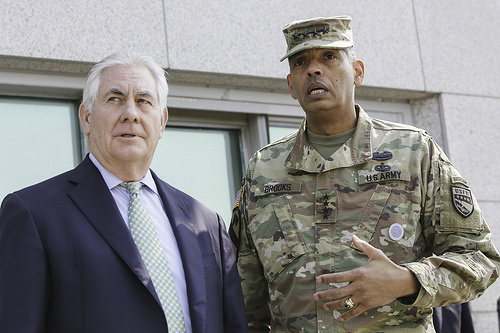 Tillerson’s comments came after meetings with Russian President Vladimir Putin and Foreign Minister Sergey Lavrov in Moscow. Tillerson and Lavrov said in a joint press conference that Syria was a major subject in their discussions.

“Clearly, our view is that the reign of the Assad family is coming to an end,” Tillerson said. “And they have again brought this on themselves with their conduct of the war these past few years.”

Tillerson said that Russia could help Assad “recognize this reality.”

“We discussed our view that Russia, as their closest ally in the conflict, perhaps has the best means of helping Assad recognize this reality,” Tillerson said.

“We do think it’s important that Assad’s departure is done in an orderly way,” he continued. “So that certain interests and constituencies that he represents feel they have been represented at the negotiating table for a political solution.”

Tillerson avoided giving specific details of how Assad would leave power, saying, “We leave that to the process going forward…”