(John Wynne, Liberty Headlines) Bonuses, barbecues, gym memberships, severance packages, and trips to the zoo – those are all expenses that some states deemed appropriate, as part of money received from the federal government for programs that would help prevent people from foreclosing on their homes in the aftermath of the worst recession in United States history.

Known as the Troubled Asset Relief program, or TARP, it was passed into law in the waning days of the George W. Bush administration and was widely perceived as a bill that would bail out banks.

But another function of the program was homeownership preservation, through which government entities would purchase mortgages and mortgage-backed securities to assist homeowners.

It appears, however, that loose regulations permitted states to abuse the program – resulting in massive fraud and waste.

The abuse was discussed extensively in a congressional hearing by the House Oversight Committee on Tuesday.

There were warning signs from the start, like when the GAO issued reports on “state implementation challenges” and a lack of clearly established goals and guidelines for states.

Astonishingly, the above-mentioned expenses were deemed as appropriate because of the loose guidelines, and much of the money has not been recoverable.

Rep. Jamie Raskin (D-Md.) noted there was “bipartisan anxiety” about the waste.

Raskin seemed particularly peeved that his home state was excluded from the program in the midst of it all.

The states included either experienced unemployment rates at or above the national average or home price declines of greater than twenty percent.

“This isn’t Raleigh,” said Rep. Mark Meadows (R-N.C.), who called for the hearing. “Actually, if we could operate DC as well as we do in Raleigh, we might be in a better position.”

Among those heard from was Christy Goldsmith-Romero, Special Inspector General for the Troubled Asset Relief Program (SIGTARP), who helped to uncover many of the abuses.

She noted that in Illinois, $549 worth of TARP money was spent at a pizza restaurant.

To celebrate an employee’s upcoming wedding – and to celebrate having just received TARP funds from the U.S. Treasury.

Goldsmith-Romero noted that under federal accounting principles, there are “necessary expenses, reasonable expenses” and allowable expenses, and that a Treasury Department lawyer early on warned that this would authorize “an almost unlimited number and variety of expenditures, rendering the TARP law meaningless.”

“Ultimately, every misused dollar is one less dollar for homeowners,” she stated.

Taxpayers in Nevada were among the hardest-hit by the misuse of funds.

Goldsmith-Romero reported one example of administrators spending some of the funds to move into a new, luxury building – before moving out after deciding the rent was too high.

They eventually spent over $20,000 in the funds on legal fees after they broke the lease.

Kipp Kranbulh of the U.S. Department of the Treasury was grilled for his department’s role in administration of the funds.

His answers did not seem to satisfy members on the committee. 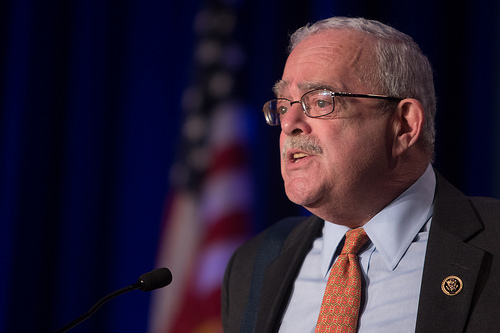 “Oh, for God’s sake!” exclaimed Rep. Gerry Connolly (D-Va.), when Kranbuhl failed to clarify whether gym memberships were a proper use of federal funds.

Goldsmith-Romero responded that state agencies were interpreting regulations very loosely to get the result they wanted, using the example of gym memberships for employees.

“Just because the federal cost principles have a line in there about health and welfare does not mean that gym memberships are health and welfare things are actually necessary and what Congress intended, and that is being lost … I think any government agency would be amazed to think that they can spend money on lavish Christmas parties, taking people on trips, even just purchasing lunch for the office on a daily or weekly basis.”

While SIGTARP has helped bring many abuses to light and has recovered a substantial amount of money for the taxpayers, it was noted that, ten years after the law was enacted, many states are winding down their TARP programs.

Less than one percent of all funds initially set aside for the program are still available.

The hearing appeared to be beneficial for members on the committee, but Rep. Connolly seemed irritated that Congress was not looking at wasteful spending in other areas.

He noted the management of the Environmental Protection Agency (EPA) under Scott Pruitt and suggested that the Committee look into wasteful spending by the Trump Cabinet.

Watch the full hearing below: