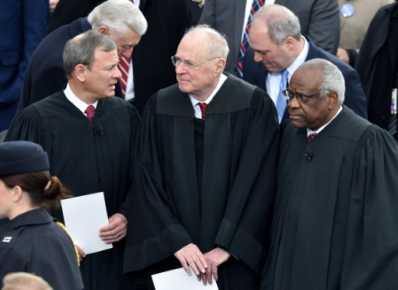 AFP/File / Paul J. RICHARDS
The departure of Justice Anthony Kennedy (C), pictured in January 2017, will give President Donald Trump a chance to shift the top US court decisively to the right

(David G. Savage, Los Angeles Times) Los Angeles artist and entrepreneur Erik Brunetti sells his T-shirts and streetwear online, and he wants the protection of a registered trademark. But his brand is a four-letter word: FUCT.

The Supreme Court heard a lively argument Monday on whether the First Amendment’s protection for the freedom of speech extended to words and symbols that the government’s trademark office viewed as “scandalous.”

The lawyers and justices managed to debate the case for an hour without uttering the disputed word, which Deputy Solicitor Gen. Malcolm Stewart referred to as the “past participle form of a well-known word of profanity.”

The 1946 federal trademark law says the government should reject registering words or symbols that are “immoral” or “scandalous.”

That is “not a restriction on speech, but a valid condition on participation in a federal program,” Stewart told the court. Brunetti is free to say what he wants or sell clothes bearing his FUCT brand, he added, describing a registered trademark as a “government benefit.”

But John R. Sommer, an Irvine, Calif., attorney who represented Brunetti, said the “scandalous” provision should be struck down because it was “so incredibly broad. … There is a substantial amount of speech that is improperly refused under this provision.” He also noted the Trademark Office had been notoriously inconsistent in recent years. It has registered a series of trademarks that involve variations of late comedian George Carlin’s famous “seven dirty words” while rejecting similar variations.

Justice Elena Kagan said she was skeptical of upholding the old law because it was outdated and overly broad. It “includes things that are offensive because of the ideas they express,” she said. “If Congress wants to pass a statute that’s narrower, that’s focused on vulgarity or profanity, then Congress can do that.”

But Justice Stephen G. Breyer questioned why the court should open the door to authorizing the use of racial slurs and vulgar words as official trademarks. “Why doesn’t the government have a right to say: ‘This is a commercial matter, purely commercial.’ Why can’t the government say we don’t want to be associated with this?” he asked. “That doesn’t forbid anyone from using the word.”

Two years ago, the court ruled for an Asian band that called itself the Slants and struck down the part of the trademark law that prohibited the use of “disparaging” words. “Speech may not be banned on the ground that it expresses ideas that offend,” Justice Samuel A. Alito Jr. said then in the case of Matal vs. Tam.

Brunetti has been selling his clothes since 1991. He applied to register his trademark in 2011 and sued after being turned down by the U.S. Patent and Trademark Office.

Based on the ruling in the Slants case, a federal appeals court ruled for Brunetti last year and said the ban on “scandalous” words violated the First Amendment.

The Justice Department appealed, and the justices sounded closely split during the argument in Iancu vs. Brunetti.

Justice Ruth Bader Ginsburg questioned why the word at issue was deemed to be shocking. “If you were to take a composite of, say, 20-year-olds, do you think that … they would find it shocking?” she said. “Suppose in the niche market where these goods are aimed, the word is mainstream.”

Stewart, the government lawyer, said the trademark office had to take into account the views of the broader public who would see the brand.

Alito worried about the effect of voiding the law. “What is going to happen with whatever list of really dirty words still exist and all of their variations? There’s going to be a mad scramble by people to register these marks. And the ones who get there first are going to have exclusive” use of them as trademarks, he said.

Justice Neil M. Gorsuch said he agreed with Breyer that the trademark was a “government benefit,” not a restriction on free speech. “Why can’t the people choose to withhold the benefit on the basis that there are certain words that are profane and that we, as a matter of civility in our culture, would like to see less of rather than more,” he said. “You’re free to use them,” he added.

Justice Sonia Sotomayor appeared to agree. “Let’s deal with the basic question: Why can’t the government say, ‘No, we’re not going to give you space on our public registry for words that we find are not acceptable’?” she said. “We don’t want vulgar, profane, sexually explicit or other words” as registered trademarks.

Throughout the argument, the justices sounded unsure as to what words, if any, could be rejected as trademarks if the law were struck down.

Chief Justice John G. Roberts Jr. asked about the “correct spelling of the vulgar word at the heart of the case. That can’t be trademarked, right?”

Yes. It could be, Sommer said.

For the chief justice, that may go too far. When parents take their children to a shopping mall, he said at one point, they do not want to see words or phrases that should not be used. And it would not help, he added, if the children could respond that the government had approved the use of the word.