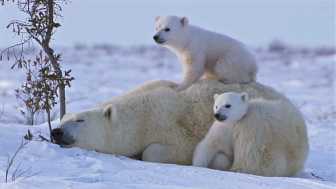 The report was compiled by zoologist Dr. Susan Crockford, and says that although Arctic sea-ice has declined recently, the numbers of polar bears have remained stable and have actually increased slightly.

In one region where polar bear numbers have dropped, the reason isn’t too little sea-ice, but too much of it.

“Ice levels during the key feeding period in Spring have been good, and prey species have been abundant. It’s not really a surprise that polar bears are doing so well,” Crockford said in a press release.

“The fearmongering from the media and the polar bear specialists is now backfiring,” Crockford added. “They convinced the world that polar bears were doomed but the facts got out. Now would be a good time to set the story straight.”

**MORE COVERAGE OF THE GLOBAL WARMING FRAUD at LibertyHeadlines.com**