‘We’ve got to do something differently and people should be able to protect themselves….’

The report contains dozens of recommendations. Some would require action by the governor and Legislature, such as the proposals to allow some teachers to carry guns and increase spending on school security. It also calls for laws to be changed to allow school districts to raise taxes for security improvements and to require rather than simply permit mental health providers to notify law enforcement if a patient threatens anyone with harm. Many of the proposals were inspired by errors and weak spots that came to light after the Feb. 14 massacre of 17 people.

Pinellas County Sheriff Bob Gualtieri, chairman of the commission, said many recommendations could have been implemented a long time ago had school safety been treated with the importance it deserved, particularly by school districts.

Galvano said the recommendations will be taken up Tuesday at a meeting of the Senate Education Committee. He said he would consider supporting many of the proposals, including the one to allow teachers to carry guns, which would be accomplished through expanding the school Guardian program.

“I am committed to making sure our re-examination of school safety policies does not end with the legislation we passed last year,” he said in a statement.

Gualtieri spoke forcefully in favor of the commission’s proposal to arm teachers, noting that the shooter had paused five times to reload — providing opportunities to stop him.

Broward School Board member Robin Bartleman said she doubts the board will support allowing teachers to carry guns but thought the board should revisit the issue.

“I am very concerned about arming teachers,” Bartleman said. “I think it’s a discussion we need to have with the community. I have not found many people in favor of this. The overwhelming response I get is people don’t want teachers with guns.”

Board member Lori Alhadeff, whose daughter Alyssa was killed at Stoneman Douglas, also opposes the idea.

“Teachers went to school to teach,” she said. “That is their expertise. Law enforcement, their expertise is supposed to be to engage a threat. Unfortunately, that didn’t happen on 2/14, but I still think we should leave it in the hands of law enforcement.”

Under current law, most teachers aren’t allowed to be armed, but ROTC instructors, current military members and those with law enforcement experience are. Non-classroom personnel, such as administrators, guidance counselors and librarians, also can be armed. However, Broward decided against arming current employees and instead to use police officers and “guardians,” which serve in schools that don’t have a sworn officer.

Neither Superintendent Robert Runcie nor a district spokesperson could be reached Wednesday, despite attempts by phone and email. The school district’s calendar listed administrative offices as being open Wednesday, but an out of office message from the Public Information Office said they were closed for winter break until Monday.

Here are the highlights of the commission’s recommendations:

— Recommendation: Classrooms should have established safety measures, such as hard corners — marked areas not visible from doorways — or other safe areas for students to hide, and teachers should be able to cover door windows quickly.

Status: Varies statewide, like many school security measures. The commission has accused school districts of moving too slowly on safety improvements after the shooting. The Broward school district hasn’t addressed this yet, but Superintendent Runcie said it will begin implementing changes after winter break for classrooms that haven’t already created marked areas.

— Recommendation: Every school should have a clear policy for declaring a Code Red, an emergency lockdown. All personnel should be empowered to call for a Code Red.

Status: Broward still has no policy, but the school board is considering one that would allow anyone to call a Code Red if student safety is at risk.

— Recommendation: All campus gates must remain locked, unless staffed to prevent unauthorized access.

Status: Broward policy calls for perimeter gates to be locked when class is in session. It calls for one gate that’s left open for parent or visitor access to be monitored at all times “to the extent possible.”

— Recommendation: Schools must accurately report crime and safety incidents. A South Florida Sun Sentinel investigation found that Stoneman Douglas failed to alert the state to numerous incidents and that districts throughout the state had not reported incidents such as rape, kidnapping, arson and murder.

Status: Broward’s superintendent pledged to conduct audits of the district’s reporting practices and discipline administrators who under-report incidents. It would be up to the state Legislature to authorize sanctions on school districts that don’t accurately report campus crime.

— Recommendation: Student mental health and counseling records should be part of each student’s school records and follow them from school to school.

— Recommendation: School-based arrest diversion programs, such as Broward’s Promise program, should limit the number of referrals a student can receive, report all information to the Department of Juvenile Justice and provide law enforcement with the discretion to make an arrest.

Status: The district has made changes to keep students from going back to the program, due to a state law passed last year that requires law enforcement to be involved once a student commits a second offense.

Status: Broward has not provided outside law enforcement agencies with access to its systems, but its school cameras do operate in real time. The tape delay that confused law-enforcement officers during the Parkland shooting was caused by human error; the system could have been switched to real time, but the operator didn’t realize it wasn’t.

— Recommendation: The district should investigate how Stoneman Douglas Assistant Principal Jeff Morford acted on information provided to him about the future shooter to see if any district policies were violated. If Morford’s actions did not violate policies, then those policies should be changed.

Status: Morford has been transferred from Stoneman Douglas, while an investigation proceeds. Runcie said last month the district hired a consultant to review how it has conducted threat assessments.

— Recommendation: The district should investigate whether Principal Ty Thompson’s disengagement from the threat-assessment process and failure to become informed about threats on campus violated district policy. The commission said the principal should be aware of all threat reports and how they are handled.

Status: The district has not responded to questions about whether Thompson is being investigated.

— Recommendation: School resource officers, law enforcement officers provided by the sheriff’s office or city police departments, should be more closely supervised. Their primary responsibility should be safety and security, not teaching or counseling.

Status: The Broward Sheriff’s Office has transferred its school deputies from Community Services to Special Operations to place more emphasis on school security and tactical responses.

— Recommendation: All school resource officers should be issued rifles and bulletproof vests, with these items readily available on campus.

Status: Varies statewide. The Broward Sheriff’s Office says it has equipped all deputies with carbines, a type of small rifle. All uniformed officers are now required to wear bulletproof vests. 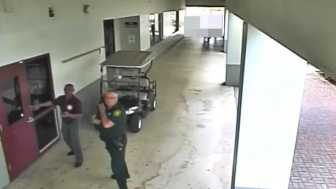 Status: The Broward Sheriff’s Office said all school deputies have attended a week of training for active-shooter and other tactical situations since the shooting, as well as the use of their new carbines.

— Recommendation: The state Legislature should increase funding for school resource officers and guardians, give school districts more flexibility in spending money for security and allow districts to raise taxes by up to 50 cents per $1,000 of assessed value without a referendum to pay for law enforcement officers, guardians or other security expenses.

Status: Would require action by the state Legislature

— Recommendation: The Broward Sheriff’s Office should conduct an internal review of seven deputies who arrived during the shooting but appeared to fail to even attempt to take effective action.

Status: Internal investigations have been opened into two deputies, and the sheriff’s office has said it would consider further reviews based on the report.

— Recommendation: BSO should revise its active-shooter policy to make clear that deputies are expected to immediately seek out the shooter.

Status: BSO has changed its policy to require that deputies confront the shooter, rather than leaving it to their discretion.

The report is not the commission’s final act. It is empaneled until 2023. It will identify areas requiring further investigation and make additional recommendations.

Despite the traumatic impact of the massacre, the report says many entities, such as school districts, have been slow to make changes.

“Even after the shooting and the implementation of new Florida law requiring certain safety measures, there remains non-compliance and a lack of urgency to enact basic safety principles in Florida’s K-12 schools,” the report says. “All stakeholders — school districts, law enforcement, mental health providers, city and county governments, funding entities, etc. — should embrace the opportunity to change and make Florida schools the safest in the nation. There must be a sense of urgency — and there is not, across-the-board — in enhancing school safety.”

The commission consists of law enforcement officers, public officials and parents of the slain students. The commission met over eight months, examining what went wrong, taking testimony from witnesses and going over the results of the work of its own investigators.

Max Schachter, a member of the commission whose 14-year-old son Alex was killed in the attack, thanked his fellow commissioners and the commissioner’s investigators for a “tremendous job” in a short period of time.