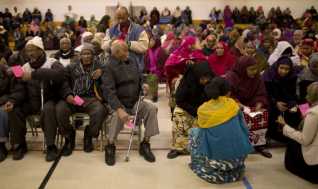 The Center for Immigration Studies hosted a panel to discuss how the federal government stopped obeying the Refugee Act and what states can do to correct it.

The panel had Don Barnett, a CIS fellow who recently published “Do States Have a Say in the Refugee Resettlement Program?”; Richard Thompson, president of the Thomas More Law Center who is challenging the constitutionality of federal resettlement programs; and Jeff Johnson, a city councilman from St. Cloud, Minnesota who “introduced a resolution calling for a moratorium on refugee resettlement.”

Barnett documented the history of the Office of Refugee Resettlement since the passage of the act.

He said that since 1980, the U.S has accepted about 80,000 refugees per year through the Refugee Resettlement Program.

As President Obama left office, however, he raised the cap to 110,000 refugees per year.

The federal government does not choose which refugees enter the country.

America has lost almost all sovereignty in the matter.

Barnett said presidents decide how many refugees to accept per year.

President Donald Trump lowered the number of refugees the country takes to 45,000 per year.

In 1994, the Clinton administration took power from the states when it passed a regulation that prevented them from withdrawing from the refugee resettlement program.

States have lost a say in the process and can’t opt out, though they’re still on the hook for the refugee’s expenses.

“Unlike other legal immigrants, refugees are eligible for all federal welfare programs on the same basis as citizens upon arrival,” Barnett said.

At the outset of the 1980 Refugee Act, the federal government reimbursed states for Medicaid, Temporary Assistance for Needy Families, and Social Security benefits that went to refugees.

By 1991, however, Barnett said the federal government had ended assistance.

Most refugees become citizens after five years, leaving the state obliged to pay for them.

And many of them require assistance.

Barnett said that Ted Kennedy, a sponsor of the act, warned against the federal government leaving the burden of the refugee program on the states.

“State and local agencies were insistent that federal assistance must continue long enough to assure that local citizens will not be taxed for programs they did not initiate and for which they were not responsible,” Kennedy said.

“Until the 1980 Act, refugee resettlement was a work of true sacrificial charity, where sponsors and charities committed to maintaining and supporting the refugees with housing and employment…even medical care if needed,” he said. “Refugees were not allowed to access public assistance. This helped assure assimilation and provided a natural regulation for the inflow.”

Thompson represents Tennessee in a legal battle against the federal government over the resettlement program.

Tennessee could not afford to pay public assistance to the refugees, so in 2008 the state decided to pull out of the program — or at least it thought it did.

But the federal government forced Tennessee to stay in the program.

“The refugees still kept coming in, and the state taxpayers still had to foot the bill. And there was this question about if we stop supporting the refugees coming in, we are threatened with the loss of 20 percent of our state budget, $7 billion,” Thompson said.

Thompson said states can opt out of the program, yet refugees will still come and state taxpayers will still have to pay for their public assistance.

Johnson said the federal government will forced St. Cloud to accept 225 refugees in 2018.

He said citizens of his district feel that the federal government is forcing them to pay for refugees that they did not consent to accept.

Another problem Barnett mentioned is that the federal government has defined “refugee” in whatever terms it wishes.

“A refugee is a person who is outside of his or her home country and is fearing return because of persecution based on race, nationality, religion, political opinion, or a particular social group,” he said. “Congress, the judiciary, and the executive branch have managed to place anybody that they want into any of those categories if they have to.”

Thompson said the solution to states’ rights in regard to the Refugee Resettlement Program may reside in the courts.

Barnett said he would simply want a narrower definition of the program.

Mark Krikorian, executive director at CIS, agreed, adding that this would place a small burden on states while helping true refugees — people without any other safe options.