Big government Republicans are already in control of Congress… 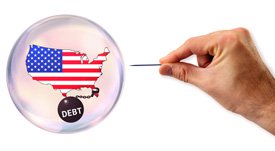 (Clint Siegner, Money Metals News Service) Americans will be headed to the polls to cast ballots in the midterm elections. Polling suggests that Democrats will return to power in the House of Representatives. Republicans are favored to hold on to the Senate.

However, political polls have proven less than reliable. There are plenty of people expecting a surprise once the votes are counted.

But there are many policies that won’t change regardless of who holds Congressional power come Wednesday.

For starters, we can count on the continuation of huge deficits. The Treasury Department’s most recent estimate is that government borrowing will double in 2018 versus last year. The bureaucracy is going to blow through $1.34 trillion more than this year’s record tax revenue.

That deficit will be the highest since 2010, back when the U.S. economy was mired in deep recession. Today, the IRS stands in high cotton. Imagine what deficit would look like if tax receipts were at recessionary levels and/or Congress was launching a major stimulus program.

The best-case scenario for deficit hawks would be a Republican victory in tomorrow’s election (although an argument could be made that a splitting of power between the two chambers would result in somewhat of a stalemate in Washington, possibly meaning less expansion of governmental programs).

Unfortunately, the “best case” is not all that good. Big government Republicans are already in control of Congress, and even the President’s supporters admit Donald Trump is not conservative when it comes to borrowing and spending.

The deficit is already exploding in size under “best case” conditions. That is why forecasters have been calling for trillion dollar deficits as far as the eye can see.

Almost nobody in Washington DC cares about sound money, and that won’t change regardless of who wins tomorrow. 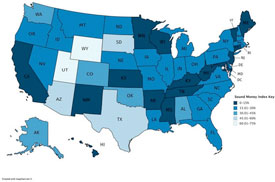 Sound Money Index: Everything You Need to Know About Gold & Silver Laws in 2018 (click on image)

Democrat and Republican leadership both adore the Fed for enabling them to perpetually spend way beyond their means. Candidates instinctively know better than to seriously rock the boat. That includes Republicans who are more concerned with reassuring voters they will protect entitlements and key programs like military spending.

As things stand, the Tea Party movement to restrain spending is all but dead.

Most citizens seem to have forgotten the Fed’s unpopular decision to bailout crooked banksters and stick Main Street with the losses in 2008. Most never understood the central bank’s role in creating that, and other, economic crises in the first place.

Instead, Fed officials managed to once again claim credit for saving the U.S. economy, by blowing yet another bubble. In the process, the central bank expanded its powers dramatically.

Some of the “extraordinary measures” launched by the Fed in recent years were promoted publicly. Others have been run completely in the dark. None encountered meaningful opposition.

Given the nearly full support of politicians and citizens alike, what can we expect but lots more plunge protection, QE, and whatever else the central planners deem necessary?

Pressure is already building on the Fed to be ridiculously accommodative again. Rising interest rates have pushed the dollar higher in foreign exchange markets and now the stock markets are beginning to flounder.

Meanwhile, President Trump wants the central bank to pause rate hikes and promote inflation. If necessary, he can install new leadership at the Fed to make sure that happens.

That isn’t the president’s only option though. Jim Rickards recently made an astute observation. If the central bankers won’t play ball, Trump’s Treasury secretary Steve Mnuchin certainly will. There is plenty he can do to weaken the dollar.

The return to sound money and limited government requires a 180-degree shift in ideology in Washington and an informed electorate. Sorry to say, that isn’t going to happen no matter how this election turns out…Original Source…